After LG disappointed swathes of customers by saying it had “no plans” to bring promised AirPlay 2 and HomeKit support to select 2018 TVs, the company has now renewed its pledge to do so by the end of the year. 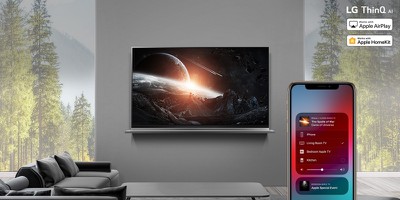 Today’s announcement was made by LG UK’s official Twitter account, the very same account that last month told its customers that ‌AirPlay‌ 2 and ‌HomeKit‌ would not be coming to its pre-2019 TVs, despite previously giving customers assurances that they would do so this year.

The original tweet has since been deleted, and it’s not clear whether this latest u-turn is the result of poor communication within the company or a reaction to the outpouring of negative customer comments that its earlier statement elicited. Either way, owners of 2018 LG smart TVs that have LCD models with “SK” or “UK” in the name or OLED models with “B8” through “Z8” in the name are likely to welcome the development.

Customers worldwide can now enjoy the Apple TV app on LG 2018 OLED and Super UHD TVs, with UHD TV models to follow. LG’s 2018 TVs will add support for Apple ‌AirPlay‌ 2 and ‌HomeKit‌ later this year, and more details will be shared when these features become available
— LG UK (@LGUK) September 7, 2020

‌AirPlay‌‌ 2 support will enable users of the above TV models to stream videos, music, podcasts, and more directly from an iPhone, iPad, or Mac to their LG smart TV, with no ‌Apple TV‌ necessary. With ‌‌HomeKit‌‌ support, they will be able to control their TV’s power, volume, source, and more using Siri or the Home app on ‌‌iPhone‌‌, ‌‌iPad‌‌, and Mac.