You can already get your lost iPhone or iPad to play a sound through Find My, but Apple is researching how the devices can signal and relay locations to each other without audible beeps or tones.

When you leave your iPhone somewhere, the first bleep you hear might be you expressing your feelings about the matter, but then currently the second could be your using Find My. You can already tell your iPhone to play a sound through your AirPods, your Apple Watch to make your iPhone bleep, and so on.

Possibly the AirPods part is a clue to why this isn’t as satisfactory as it might be. Even though the bleeping that Find My makes AirPods do is surprisingly loud, there’s only so loud it can possibly be from such a small device. Apple has plans for how this same system can be improved by cutting you out of the equation.

Instead of you straining to hear where the bleeps are coming from, your devices may manage it for you. “Locating wireless devices” is a new US Patent that describes how devices can use sound outside the range of human hearing.

“The sound is played at a specified frequency that utilizes a frequency response of the loudspeaker,” says Apple’s patent. “The sound is received through two or more microphones of the electronic device (configured for beamforming).”

Beamforming is when a signal is no longer broadcast in all directions, but rather directed at a particular device. Or during a search, in different directions until the device is located.

“A beamforming signal is generated from outputs of the two or more microphones, which is filtered by one or more filters,” continues the patent. “The one or more filters are configured to pass the sound at or around the specified frequency and to reduce masking of the sound by ambient noise.”

“The filtered sound is associated with orientation data generated from sensor data provided by one or more inertial sensors of the electronic device,” it says. “[This could be done so that] the specified frequency is higher than the maximum human hearing range.”

Rather than hearing faint bleeps from behind your couch, you instead get directed through an image on the device you’ve yet to lose. That tracking app on your device is why this system is more useful than solely playing sounds in your den.

The idea is that this function is part of a broader one to do with locating your lost, or stolen, devices whether they are nearby or not. It’s also to do with whether the misplaced device works on its own, like an iPhone, or is what Apple calls a “companion device,” such as AirPods. 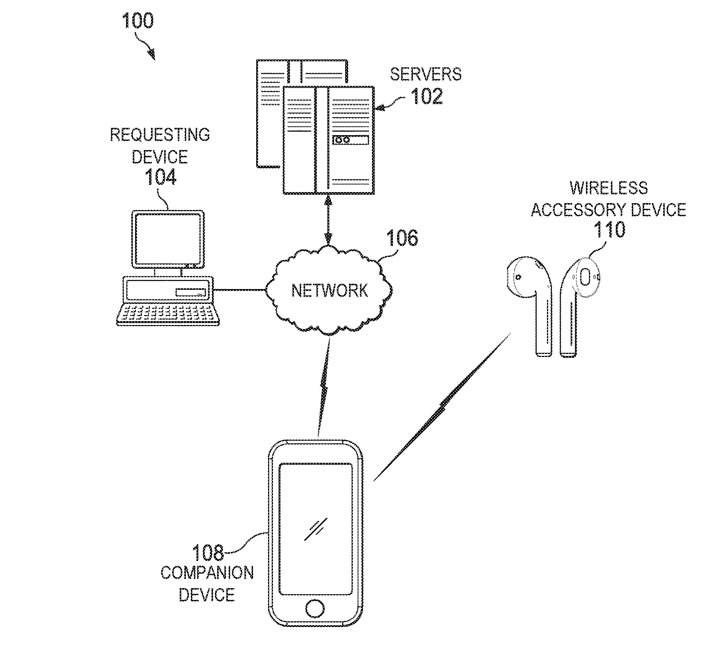 When you look for your lost device, your iPhone can first check whether it is currently successfully paired with your AirPods, for instance, and infer that this means they are near enough for this audio system to work. If not, if the lost device is out of range, then a version of the regular Find My app can be used.

This patent is credited to nine inventors, including Sorin V. Dusan, who has previous related patents including one on the coordination of beamformers for noise estimation and noise suppression.