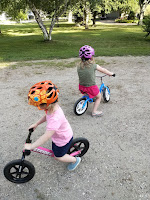 This morning I welcomed my new students into my classroom. In talking with one of them I learned that he likes to tinker with old bicycles. As we were talking he mentioned trying to create a power generator with a bicycle. That conversation took us to YouTube where we started looking at videos about using a bicycle to generate electricity. Here are a couple that I thought were worth sharing.

Can You Power a House With a Bicycle?
This is a video produced a few years ago by NPR’s Skunk Bear. The answer is no, you can’t power a house with a bicycle. The video does a great job of explaining how many bicyclists you would need in order to power an average house for a month.

This video was produced a few months ago by Backyard Trail Builds (a channel about building bike trails and jumps). What’s good about this video is that the producer explained his initial mistakes and how he corrected them. The video is also not so detailed that it doesn’t inspire more curiosity about how to improve on the design. When we have time later this year to attempt making a bicycle-powered generator, this will be a video that my students and I reference.