Shopping for a power bank can be overwhelming when considering just how many competing solutions currently exist. This makes it vitally important for any new release to do something unique in order to stand out from a staggeringly large crowd of competitors. Unsurprisingly, the new Satechi Quatro Wireless Power Bank manages to pull this off with flying colors. Not only can it charge iPhone and AirPods wirelessly, but you’ll also find USB-A and Type-C ports. And that’s not all. Arguably the real standout feature has to be built-in support for charging Apple Watch. Continue reading to learn more.

The all-new Satechi Quatro Wireless is a power bank with a premium appearance. Beyond its looks, you’ll find a 10,000 mAh capacity, which Satechi touts as wielding enough power to recharge an iPhone 11 up to two times.

An integrated Apple Watch charging puck is easily spotted along the top, allowing you to always leave your existing charger plugged in at home. Many are bound to love this feature as several competing solutions require you to bring your own cable.

In addition to having a built-in Apple Watch charger, Satechi Quatro Wireless also wields a Qi coil for easily topping off an iPhone, pair of AirPods, and more. Both USB-A and Type-C ports can also be found on this power bank, with the latter both accepting and shelling out up to 18 watts of juice. 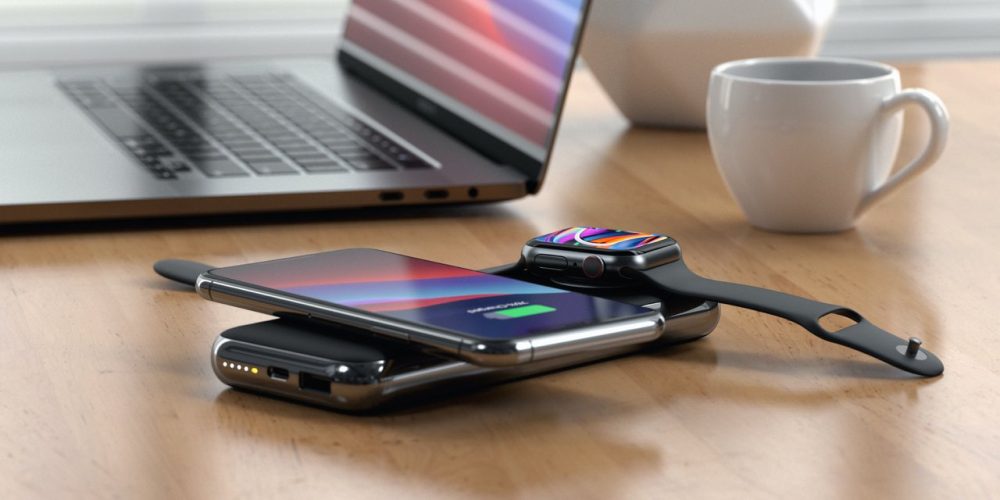 Official pricing for Satechi Quatro Wireless is $99.99, but anyone placing a pre-order can currently take 20% off when using code QUATRO at checkout. Ship dates are currently slated for mid-October. While Quatro Wireless is sold solely through Satechi at this time, we do expect it to show up in the company’s new arrivals on Amazon at some point in the near future.

My favorite power bank to date features built-in cables and Qi charging but lacks integrated support for Apple Watch. Adding built-in charging for Apple’s wearable is something that handily sets Satechi Quatro Wireless apart from much of the competition.

Top that off with a premium design that mirrors what you’ll find in high-end models of iPhone and Apple Watch and it becomes immediately clear why Satechi’s price tag is actually quite reasonable. While I do wish its USB-C port was more powerful like my go-to from TYLT, Satechi Quatro Wireless does seem to be a well-rounded solution that’s bound to find its way in many bags.