The Moko Stylus emulates the Apple Pencil experience with a slim form factor and easy pairing system with a few notable compromises.

The Moko Stylus functions very similar to the Logitech Crayon but in a much cheaper and sleeker package. Overall the stylus is great for general purpose uses, but professional artists may want to look elsewhere.

At a glance, the Moko Stylus could easily be mistaken for a second-generation Apple Pencil, with its smooth cylindrical white finish with one flat side. It has a flat top where an eraser would be to allow for a micro-USB port for charging.

The lack of Lightning is likely due to the cheap nature of the product— licensing that port would bring the cost much higher.

A clicky button sits right where your fingers would rest while holding it, but it only functions as an on/off switch. When the stylus is on, a blue light shines through the button.

This is a distraction to the design, and while useful for determining power-state, it is an overall-ugly addition.

The tip is replaceable, and the box comes with a replacement. The product description says that it will not scratch your screen, but the instruction pamphlet included says a screen protector is recommended.

No scratching occurred on the iPad Pro or iPad mini tested when used without a screen protector.

The Moko Stylus appears to be using the same pairing system as the Logitech Crayon. When powered on, it will work on any iPad 2018 or newer with iOS 12.2 or more recent.

If you have an Apple Pencil paired to the iPad, you must turn it off in settings or cycle Bluetooth with the Apple Pencil disconnected — only then will the Moko Stylus work.

Since it is using similar technology to the Logitech Crayon, you can switch between iPads without pairing. For example, the iPad Pro and iPad mini both accepted input from the Moko Stylus without any prompt or pairing.

Not all the features of the Logitech Crayon are here, however. The chart below defines the capabilities of each iPad stylus. 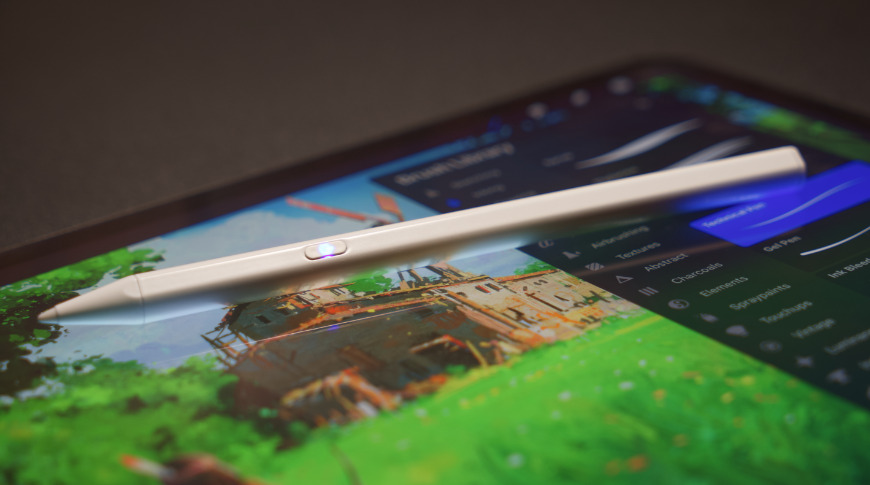 The Moko Stylus on the iPad Pro

The Moko Stylus feels fine in-hand, although the power button is right under your finger, which can be uncomfortable. The feeling of using the Moko Stylus is not very different from using the Apple Pencil, except Apple’s stylus is weighted more evenly.

The stylus mounts to the side of the flat-sided iPad Pros for convenience but does not charge this way. It uses micro-USB to charge, which is very disappointing despite the lower cost.

Unless you already have a reason to carry a micro-USB cable, this is just one more cable to have.

The manufacturer promises long battery life — up to 20 hours of continuous use and a year of standby time for a full battery. Moko also says it can fully charge in 100 minutes, and to maintain battery life, the stylus will go to sleep after 5 minutes of inactivity.

There is an LED indicator in the power button. A blue light shows when it is powered on and working, a red light shows that it is charging, and a green light indicates it is 100% charged.

The Moko Stylus works with the following devices:

Should you buy the Moko Stylus?

If the Apple Pencil is out of your price range or the Logitech Crayon is too bulky or expensive, the Moko Stylus is a great alternative. The stylus may not be a good choice for artists, but anyone who wants basic note-taking or precision control in photo editing tools could benefit from it.

Do not buy if you plan on doing more than a simple sketch. Tilt and pressure control are absent, so most artistic endeavors will be challenging.

The Moko Stylus is available on Amazon for $26.99. Customers who use the coupon code AAMA-VTQJ99-4WE5AE can save 50% on their purchase.