If you have a number of Google Home or Nest speakers and Smart Displays scattered around your house, why not put them to use as a broadcasting system? That’s exactly what you can do with the Google Assistant.

Google Assistant’s broadcasting feature works like a modern intercom. You can broadcast a message to your kid’s room to tell them dinner is ready, or send a message to the whole house when you’re away. It’s a very useful feature.

Before we get into the process of broadcasting messages, let’s cover some basics. You can broadcast a message from the Google Assistant on your smartphone or tablet, or a Google Nest or Home device that’s a part of your smart home.

Broadcasts can be sent to every Google Nest or Home device in your house, or directed to specific rooms and devices. It’s also possible to reply to a broadcasted message.

To use a Google Home or Nest smart speaker or Smart Display, you simply need to say “Hey, Google” and one of the commands below. With an iPhone, iPad, or Android device, you need to launch Google Assistant.

On Android, there are a number of different ways to launch the Google Assistant. The first is to say “OK, Google” or “Hey, Google.” Newer devices can launch the Assistant with a swipe from the bottom left or right corner.

On iPhone and iPad, you need to install the Google Assistant app and launch it from the home screen. After you open the app, say “OK, Google” or tap the “Microphone” icon and Assistant will begin listening.

To broadcast a message to every Google Nest or Home device in your house, use one of the following commands:

To specify where the message will be broadcast, use these commands:

The difference between these two phrases is the first one will broadcast on every device in the room, whereas the latter will broadcast on only the mentioned device. You can find the name of each device and room using the Google Home app on iPhone, iPad, or Android. 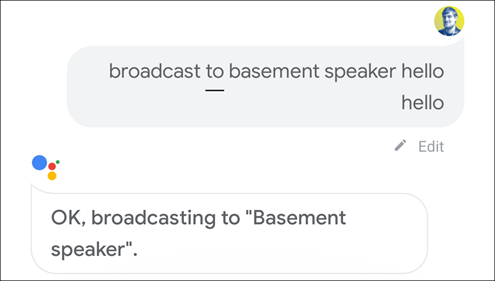 Respond to a Broadcast

Responding to a broadcast works in a similar way as sending one. After the Google Assistant is done reciting the message from a speaker or Smart Display, say “Hey, Google” and the following commands: