When you buy your first-ever iPad, Apple makes it particularly quick and easy to get going. As soon as you buy your second, though, then you need to take these certain steps to get the new one working just how you like.

Perhaps the most likely thing is that you are buying a new 10.2-inch iPad as a replacement for the old one. A new model will be faster, it’s bound to have a bigger screen, and now that you know how you use it, you can pick one with the right storage capacity for you.

If you want to keep your old one and use both, you at least need to think about how that will happen and what you want. You could set them both up identically, with the same apps arranged in the same places on your homescreen, and all with precisely the same settings and documents.

Alternatively, you could choose to devote one iPad for certain tasks, and the other for something else. Such as having an iPad Pro that you use for work and now adding an iPad mini that you chiefly have to read on for pleasure.

The different ways of setting up an iPad

Aside from setting up your first-ever iPad, that’s three different options to think about. Replacing the old iPad entirely, setting up a twin, or setting up the new iPad as a separate device.

It isn’t a separate device, though. Under all three of these options, you need to link them and you have to do that by setting up the same Apple ID on each.

That’s because no matter what you do on however many iPads you’ve got, you can’t practically use an iPad without an Apple ID. You wouldn’t want to, anyway, as when you have an Apple ID, you have iCloud, and you can keep your data safely backed up.

There’s nothing to stop you creating a new Apple ID for every iPad, iPhone and Mac you own, but that way lies madness. You cannot recombine Apple IDs later and you will forever lose track of which account has which email on it.

So regardless of how you plan to use this new iPad, you have to add it to your current Apple ID. Beyond that, you really need to backup your old one. 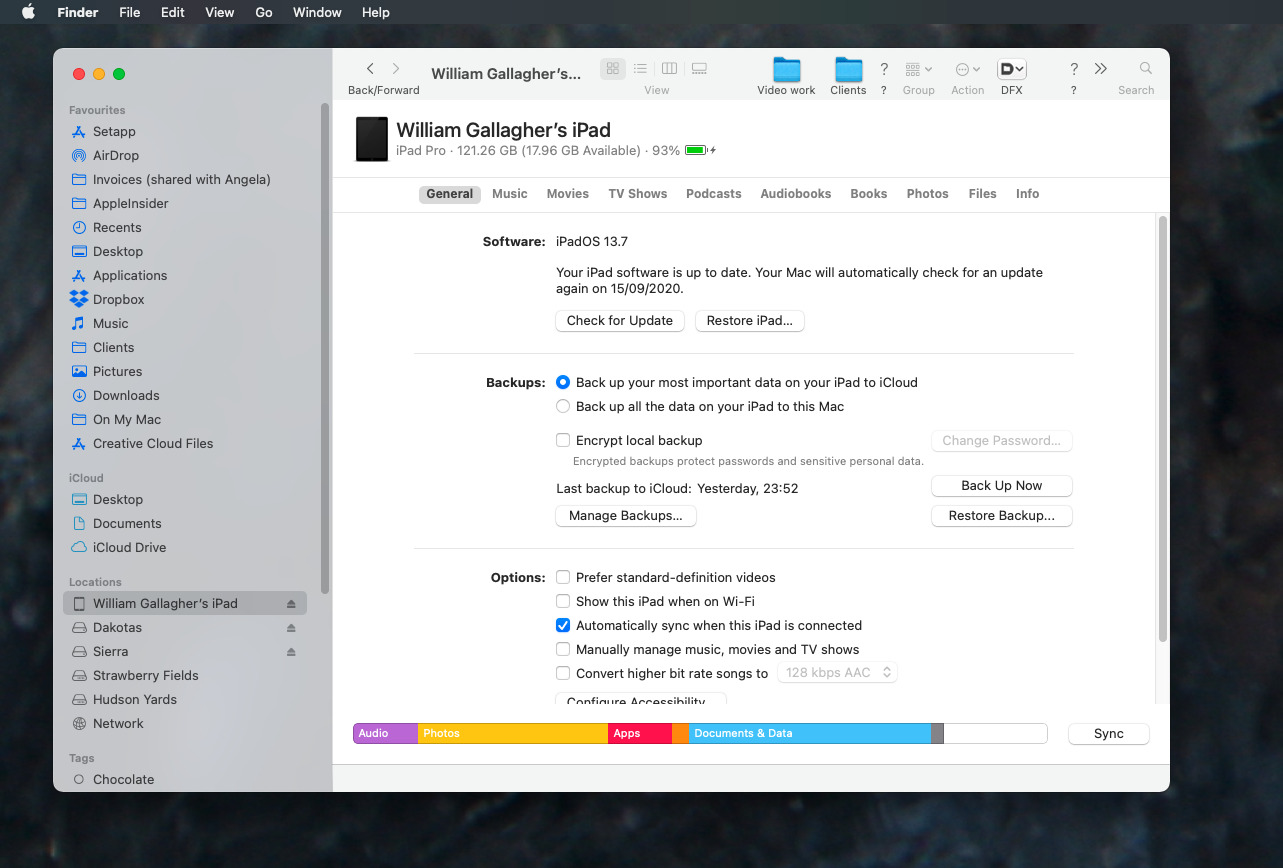 Backup your old iPad to a Mac

Back up your old iPad first

If you’ve been around Apple devices for long enough, you know that there used to be an issue over whether you backed up your iOS device to iCloud or to a Mac. There isn’t as much any more. You can choose whichever is convenient for you.

The real difference is that if you backup an iPad to a Mac, then everything on it gets backed up, including your apps and any media such as books or video. If you backup to iCloud, it’s your settings that get stored, not the content.

This needn’t be significant as if you backup to iCloud and then restore from it, your iPad will re-download all the apps and all the content that you had.

Inevitably, that’s going to be slower than restoring everything from a Mac, though. So the Mac is best option, but iCloud works fine enough.

Whichever way you do it, back up even if you intend to use the new iPad as a separate device. On the one hand, it’s good to make regular backups anyway. But on the other, it’s easiest to put all your old apps on the new iPad and then remove what you don’t want.

How to back up your old iPad on a Mac

How to back up your old iPad without a Mac

In either case, you now have a backup of your iPad which will speed setting up your new one considerably. Next you need to prepare that new iPad.

How to set up the new iPad

Begin the process by using what Apple calls Quick Start, first introduced with the iPhone 8 and iOS 11.. Place your new iPad beside your old one, and turn both on.

After a moment, the new iPad should recognize that you have an existing one, and it will offer to use the Apple ID associated with that older device. Tap Continue to accept that and then hold the new iPad over the old one.

Backup your old iPad to iCloud

An animation will appear on the old device. Hold the new iPad over it so that the camera shows you the animation on the screen. When it appears, tap on Finish on New iPad.

You’ll have to manually enter your Apple ID and password on the new iPad, to make sure that it is you doing this. And then you’ll have to go through the setup steps of adding Face ID or Touch ID on the new device.

Restore all your apps

This has effectively made the new iPad yours, in that it has your Apple ID on it. Go the rest of the way and have the App Store reinstall all of your apps — which you do through the restore process.

Your new iPad will offer you the option of reinstalling apps, and restoring data and settings from the backup you just made, and this is always the fastest route. Tap to choose this and you’ll be shown a list of recent backups with their dates.

Pick the latest one by taping on the most recent date. Then just wait for your iPad to do the restore. This may take some time, depending on the size of the apps you’re reinstalling.

Finish setting up the new iPad

Once all of your apps are on the new iPad, you could go through removing any you don’t want on it. Equally, you could now go to the App Store to add any that you haven’t got on your old iPad.

In practice, you’re going to find that it’s best to do this over time. Don’t delete any apps until you’ve used the iPad for a while and learned what you really do or don’t want on it.

Finish with the old iPad

If you’re keeping the old iPad, you’re done. The two machines will work perfectly together, and you’ll keep forgetting which one needs charging up.

However, if you’re going to get rid of that iPad — either by selling it to a stranger or giving it to a family member — you must do certain things. Basically, you’re removing your Apple ID and returning the old iPad to its out-of-the-box state.

Now your old iPad is ready for someone else to set up as their own. And your new one is ready for you to work on.