The first big Apple event of the season is finally behind us and there’s no question whatsoever that it was unlike any other September Apple event in the past. Of course, there are two main reasons for that. First of all, this is the first time Apple has ever hosted a September press conference with no press in attendance. The ongoing coronavirus pandemic obviously prevented Apple from inviting the media to cover its announcements, so it hosted a virtual event instead that was streamed online.

Second — and far more importantly — this was the first time in the iPhone era that Apple held a September press conference without announcing any new flagship iPhone models. That’s right, Apple’s big September event is now behind us, but the iPhone 12 series has yet to be unveiled.

Apple stated on its most recent earnings call that the release of its new iPhones had to be delayed as a result of manufacturing issues brought about by the coronavirus pandemic. Of course, Apple still could have unveiled the new iPhone 12 series during its event on Tuesday and noted that they’ll be released sometime in October, but we all knew that wasn’t going to happen. The name of the event was “Time Flies,” which clearly meant that the focus would be new Apple Watch models. There was plenty more in store from Apple on Tuesday though, and we’ll recap all of the company’s biggest announcements right here in this post.

The new Apple Watch Series 6 is finally official and the first things you’ll notice are the new colors, including the first-ever blue aluminum finish and the first PRODUCT(RED) version.

A new sensor in Apple Watch Series 6 enables blood oxygen readings for the first time in an Apple Watch. In the age of the coronavirus pandemic, it’s the perfect time to add a pulse oximeter to Apple’s health-focused wearable. Healthy blood oxygen levels are 95% or higher according to the Mayo Clinic, and COVID-19 impacts the lungs and drops blood oxygen saturation levels. In other words, the Apple Watch may be able to give you an early warning of a possible coronavirus infection.

Apple Watch Series 6 features the new S6 chipset with a new and improved always-on display. There are obviously plenty of new watch faces in watchOS 7 as well, including a GMT face, a Countup Face, a Typograph face, a Memoji face, a Stripes face, and a Chronograph Pro face. Developers can now create their own Apple Watch faces, too.

The Solo Loop and Braided Solo Loop are clasp-less, buckleless bands that Apple is introducing alongside the new Apple Watch Series 6. Instead of using a traditional closure, it stretches to fit over your hand. Other new bands were also unveiled.

Also of note, a new “Family Setup” feature lets you set up an Apple Watch for a child or elderly person who doesn’t have his or her own iPhone. Until now, an Apple Watch had to be paired with its own iPhone in order to function. The feature works on Apple Watch Series 4 models and later, though the watch will need cellular connectivity in order to work.

Like the Series 6 model, Apple Watch SE preorders begin today ahead of a release this coming Friday. You can learn more about it here. 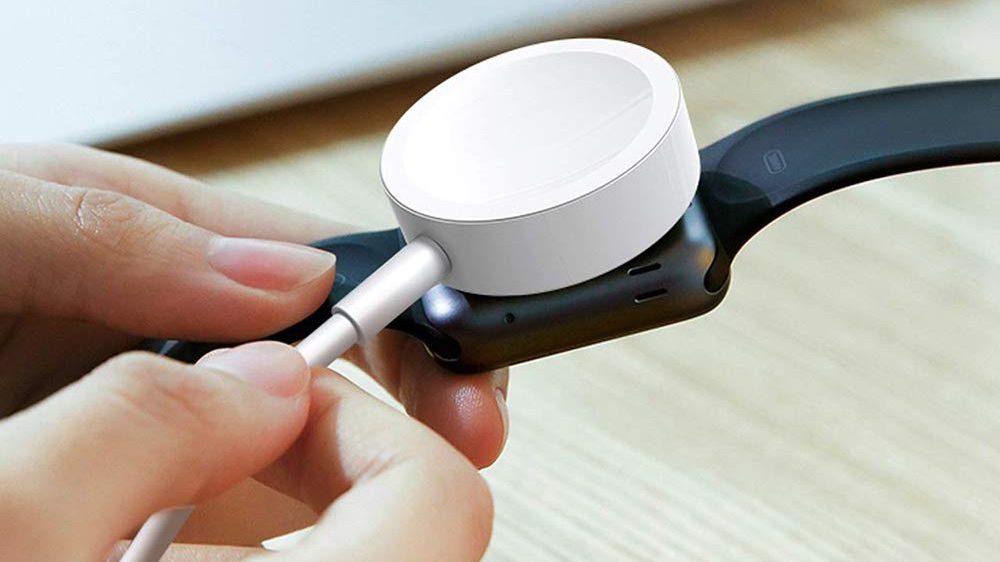 While touting benefits for the environment, Apple confirmed that it will no longer include USB adapters with its new Apple Watch models. The charging cable will of course still be included, but you’ll need to use a wall adapter you already have or buy a new one.

Rumor has it the same will be true with Apple’s new iPhone models, though nothing has been confirmed at this point. There are unquestionable environmental benefits to making fewer power adapters, but there’s also no question that the impact on Apple’s bottom line was a key driver for the move.

Peloton is not having a good day on Tuesday. Apple announced its new Apple Fitness+ product, which is a subscription service that integrates with the Apple Watch. Tons of different types of workouts are included in the service, such as Yoga, Cycling, Dance, Treadmill, Strength, Core, Rowing, and more. New workouts will be added each week from real trainers and instructors.

Apple Fitness+ will be accessible within Apple’s existing Fitness app on the iPhone and Apple Watch, as well as in the new Fitness apps on iPad and Apple TV. Fitness+ costs $9.99 per month or $79.99 per year, and a subscription can be shared by an entire family at no additional cost. Learn more right here.

We all read the rumors, and now it’s here: All of Apple’s subscription services can now be bundled into a single monthly subscription. 2TB of iCloud storage, Apple Music, Apple TV+, Apple Arcade, Apple News+, and the new Apple Fitness+ service can all be had for $29.95 per month. There are also less expensive bundles available with fewer services. Pricing and package info can be seen in the image above.

Apple’s 8th-gen iPad is powered by the A12 Bionic chip for more power and better graphics. Apple says its A12-powered iPad is up to 2x faster than Windows laptops, which is a pretty bold claim. New OEM and Logitech keyboard accessories will be made available alongside the new iPad, and it will finally support the Apple Pencil stylus. The overall design is the same as Apple’s 7th-gen iPad.

The new iPad 8th-Generation starts at $329, like the previous-generation model. Preorders open today and it’ll be released this Friday. You can check out more info here. 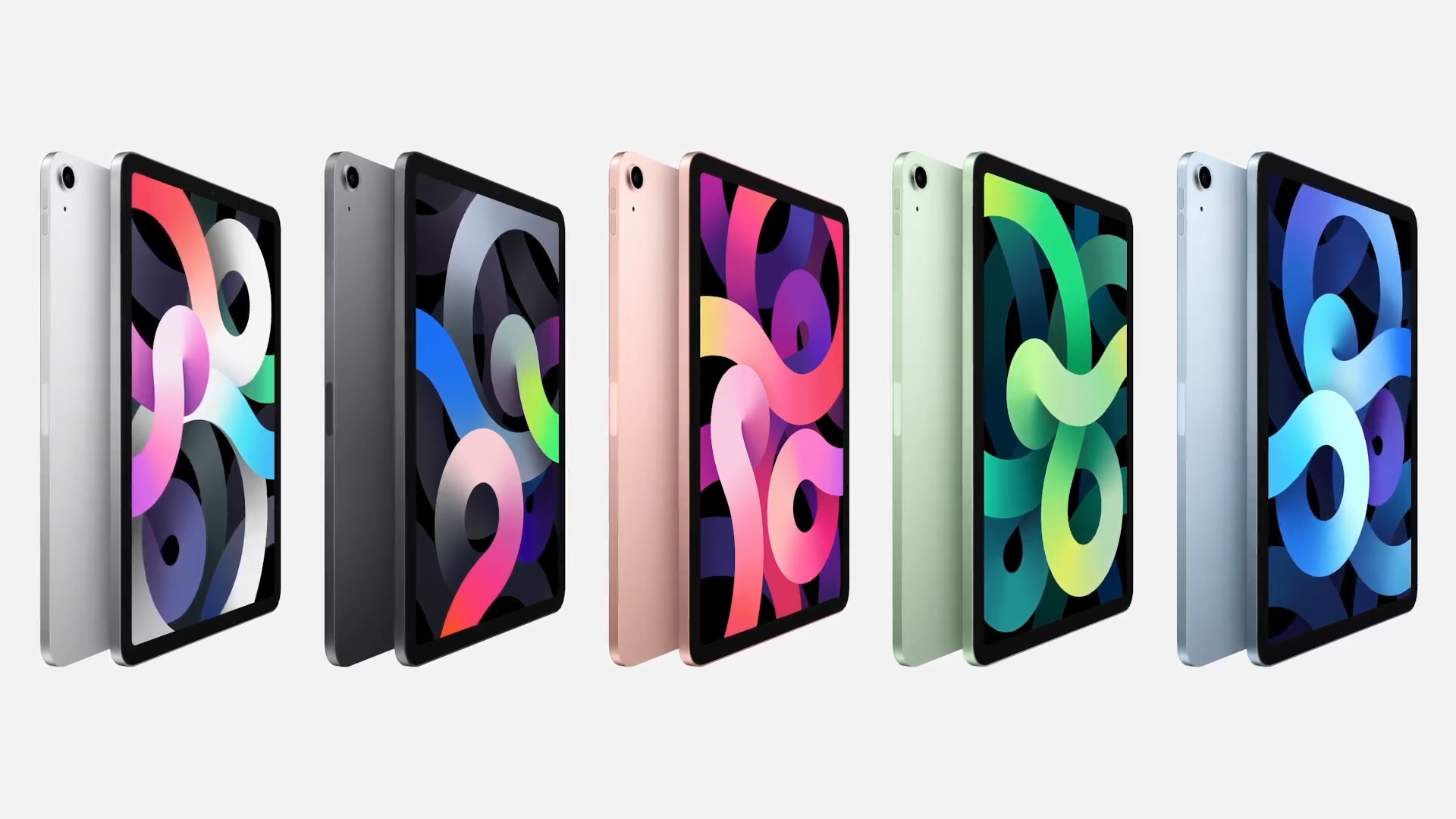 Unlike the iPad 8th-Generation, Apple’s new iPad Air has a completely overhauled design. It has flat edges like the iPad Pro (and upcoming iPhone 12 series), and it’s the first Apple device ever to feature a side-mounted power button with a built-in Touch ID fingerprint sensor. The new iPad Air has a 10.9-inch Liquid Retina display with full lamination and all the other bells and whistles Apple displays are known for. The new iPad Air is also the first Apple device to be powered by the powerful new A14 Bionic processor since it’s beating the iPhone 12 line to market. It’s Apple’s first 5nm chip with a whopping 11.8 billion transistors on each chip. Apple says the new chipset is 40% more powerful, has 30% better graphics performance than last year’s A13 Bionic chip.

Rose Gold, Green, and Sky Blue colorways have been added in addition to Silver and Space Gray. Pricing starts at $599, and the iPad Air will be released sometime next month. There’s PLENTY more you need to know about the new iPad Air, so be sure to check out our full coverage for more.

Zach Epstein has worked in and around ICT for more than 15 years, first in marketing and business development with two private telcos, then as a writer and editor covering business news, consumer electronics and telecommunications. Zach’s work has been quoted by countless top news publications in the US and around the world. He was also recently named one of the world’s top-10 “power mobile influencers” by Forbes, as well as one of Inc. Magazine’s top-30 Internet of Things experts.