During Apple’s “Time Flies” media event, Apple CEO Tim Cook announced that many of its major software versions would be available to users starting tomorrow, September 16 as free updates.

Starting September 16th, users will be able to download iOS 14, iPadOS 14, watchOS 7, and tvOS 14 for free on their iPhone, iPad, Apple Watch, and Apple TV. These updates include major features and changes for users across the board.

All of Apple’s new devices that were just announced including the Apple Watch Series 6, eighth-generation iPad, and iPad Air will all ship with these updates when they are released. 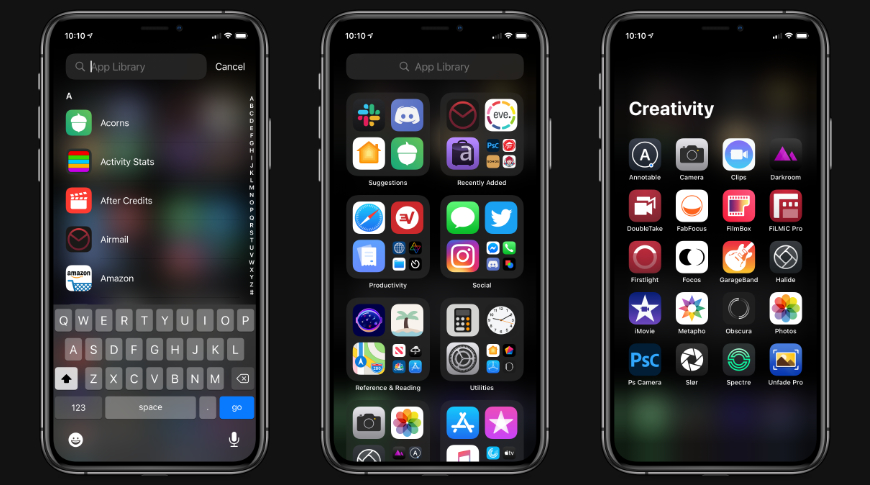 The Home screen has been changed for the first time since its debut on the first iPhone. Users can now remove all of their installed apps from the Home screen to be stored in the App Library.

The App Library acts as an app repository where installed apps are automatically organized into app categories and can be found using a search bar at the top of the screen. Navigate to the right-most screen to see your App Library.

Users can remove any or all apps on their Home screen, or hide entire pages. Hiding pages allows users to have purpose built Home screens that can be revealed at different times, like for work or a project. 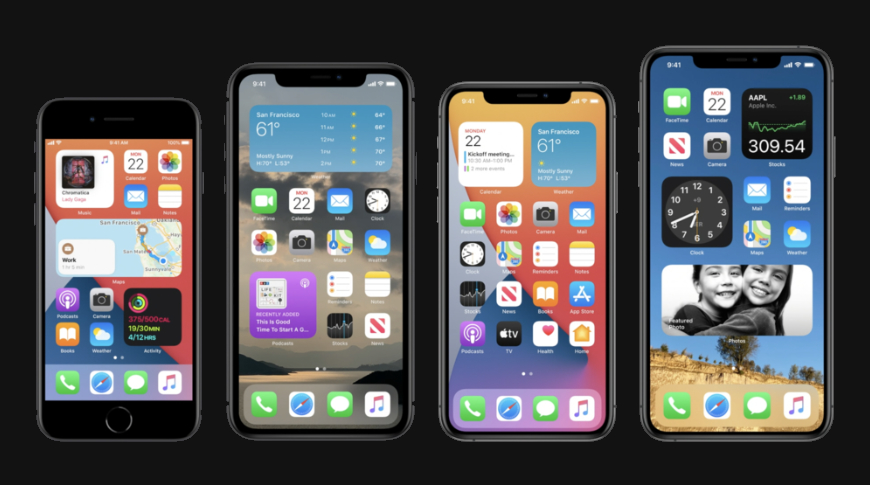 For the first time, users can now bring widgets onto the Home screen. The widgets come in multiple sizes and can be placed anywhere on the screen among the apps.

Widgets can stacked on top of each other for fast switching. There is also a Smart Stack option which will automatically show the most relevant widget throughout the day.

Another major design change is coming to iOS 14 called Compact UI. Previously, users would see the entire display taken over by the Phone app anytime a call came in, or Siri would take over the display and obscure whatever relevant information was on the screen. 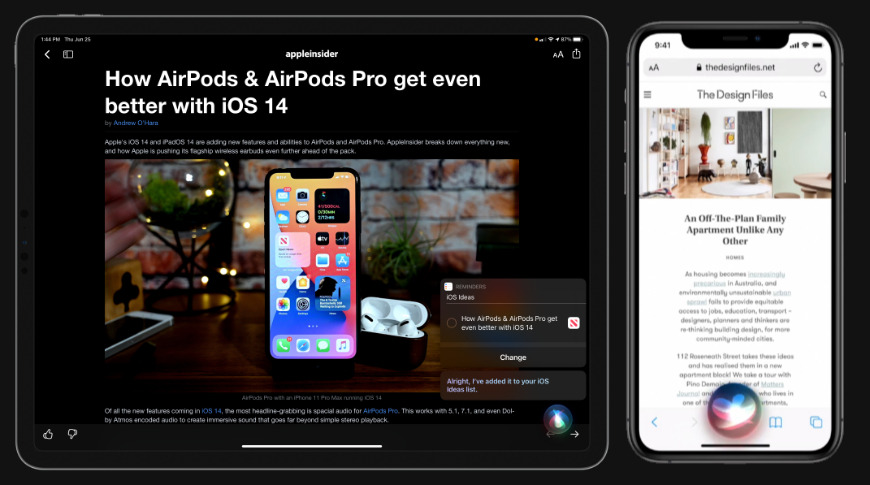 Now, all interactions that previously took over the screen only take up a small portion of it. Phone calls slide in from the top as a notification widget, Siri acts as a small ball of light at the bottom of the screen, and Shortcuts execute from notification panels as well.

This change has been a long requested feature from users who did not want their screen taken over at any random time due to a phone call or inadvertent Siri activation.

Along with Compact UI, Siri saw some other changes across the system. Siri Intelligence has been upgraded to better understand the user and remember queries between Siri interactions.

One example includes a short interactive adventure featuring “Goldilocks and the Three Bears,” where users can choose what happens via responses to Siri. This occurs when asking Siri to “tell me a story.” Even if the interaction is ended and Siri is summoned much later, the assistant will ask if you’d like to resume the story or start over. 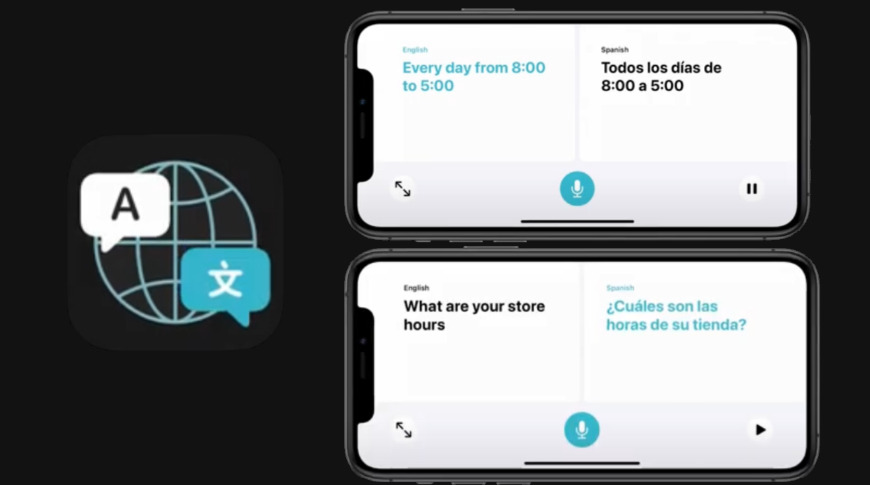 Siri will handle language translation on Safari webpages or a new app called Translate. Users can open the app and paste text in for an instant translation, or speak into the app for real-time translation and playback. The feature exists entirely on-device via machine learning for maximum privacy and security.

There are several behind the scene changes to how data is shared across iOS. When an app accesses the clipboard, camera, or microphone a small banner will display at the top of the screen.

When the camera or microphone is in use, a small colored dot will appear above the signal bars on the right side of the status bar, green for camera and orange for microphone. When the control center is accessed a small banner will be displayed at the top of the screen showing the last app to access either the mic or camera. 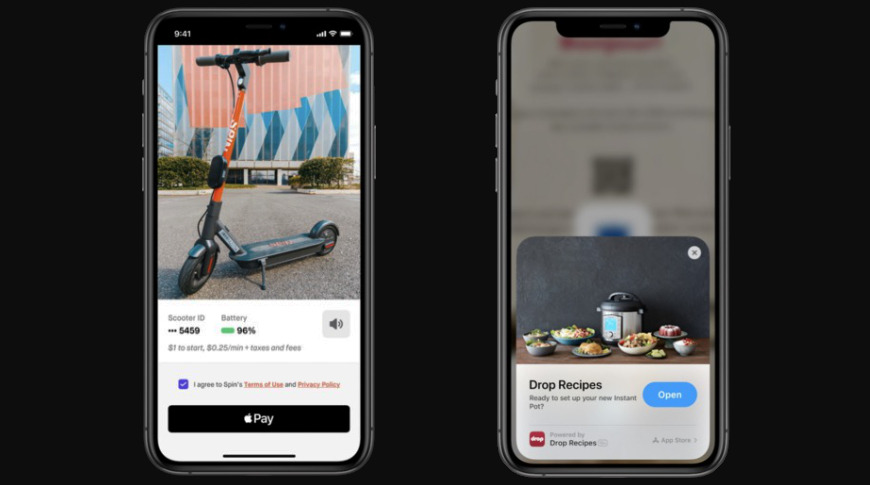 With iOS 14, users can tap an NFC sticker, click a link, or scan a special QR code to access a “Clip.” These App Clips are lightweight portions of an app, required to be less than 10MB, and will show up as a floating card on your device. From there, you can use Sign-in with Apple and Apple pay to complete a transaction in moments, all without downloading an app.

Apple continues to update iPadOS separately from iOS due to the differing hardware. All the features mentioned before are available in iPadOS 14 with the exception of App Library. The new widgets are limited to the “Today View” on iPads.

Compact UI changes how Siri and Universal Search works on iPad too. When Siri is on the screen, users can still interact with the content behind it. Universal Search does not obscure the entire screen, taking on a Mac-like design.

iPadOS 14 lets you write in text boxes with Apple Pencil

The Apple Pencil can now be used to hand write data across the OS. Any text entry block can be written in and the handwritten text will turn into typed text in real-time.

Text select gestures like tapping to select a word now work with handwritten text. Users can copy and paste handwriting even when its written in multiple languages. Data detection also works for phone numbers or addresses written with the Apple Pencil. 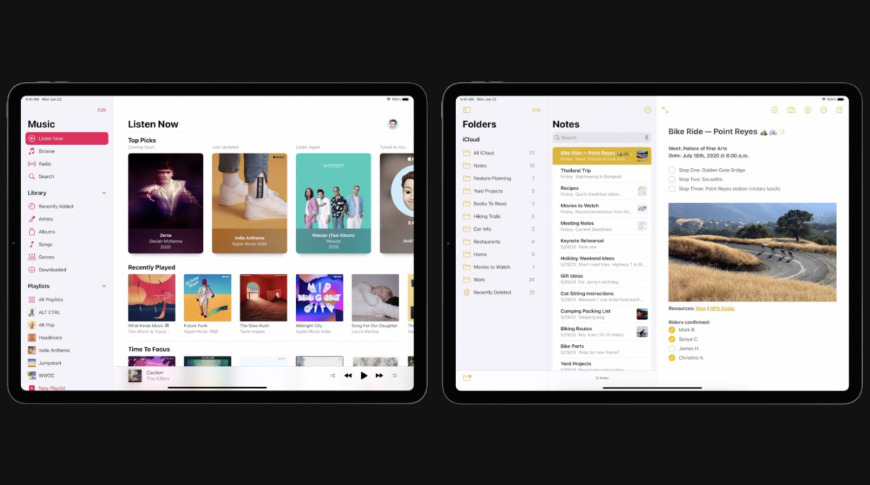 Apple has changed the UI of many of its first-party iPad apps. They now resemble Mac apps with persistent sidebars for navigation. Some apps like Voice Memos can show three panes of information at once in portrait or landscape orientation, though Apple has not made this work in every app.

The operating system, which was first outed by Apple during June’s WWDC, has gone through eight developer beta cycles and five public betas before its release. Now, members of the public who were not involved in any of the betas will be able to download and install the update to their own Apple Watch.

Users can update to watchOS 7 by accessing the iOS Watch app and navigating to General then Software Update, though it can also be installed automatically by the app if set correctly. The Apple Watch has to be at least 50% charged and placed on a charger within range of the iPhone to install the update.

The update will be available to use on all models of Apple Watch from the Series 3 onwards.

The key features of the update revolve around sleep monitoring and watch face sharing, but as always, there’s many elements included in the release.

Building on top of the basic tracking offered in Bedtime, the sleep tracking system included in watchOS will provide more data about how a user sleeps. By tracking small movements using the built-in accelerometer, users will be able to see how well they slept, as well as being able to keep track of their long-term sleep patterns. 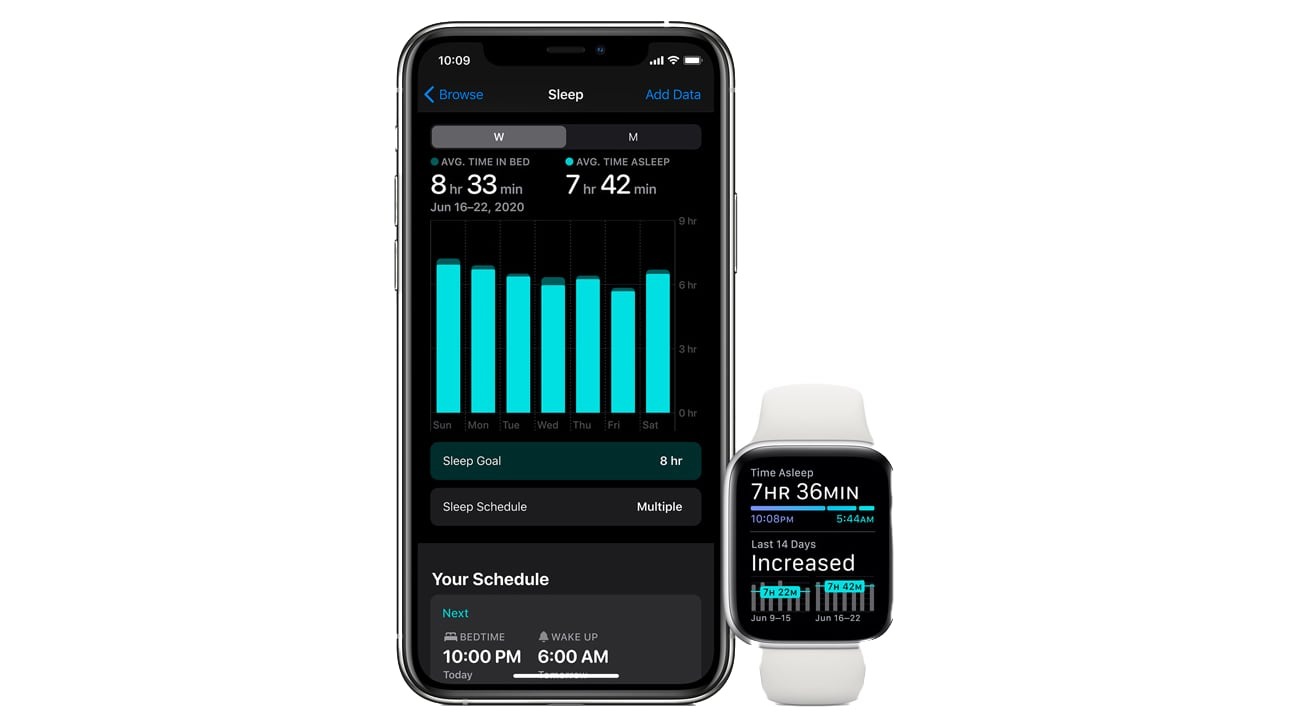 Sleep tracking in watchOS 7 and the iPhone Health app

To assist with getting a better night’s sleep, the Wind Down feature will allow the Apple Watch and iPhone to be used to make customized bedtime routines, that are set to trigger when a user should be heading to sleep. This can include running a meditation app, playing relaxing soundscapes, and dimming HomeKit-enabled lights.

Considering the ongoing COVID-19 pandemic, the handwashing feature of watchOS 7 may be a highly important but minor addition. 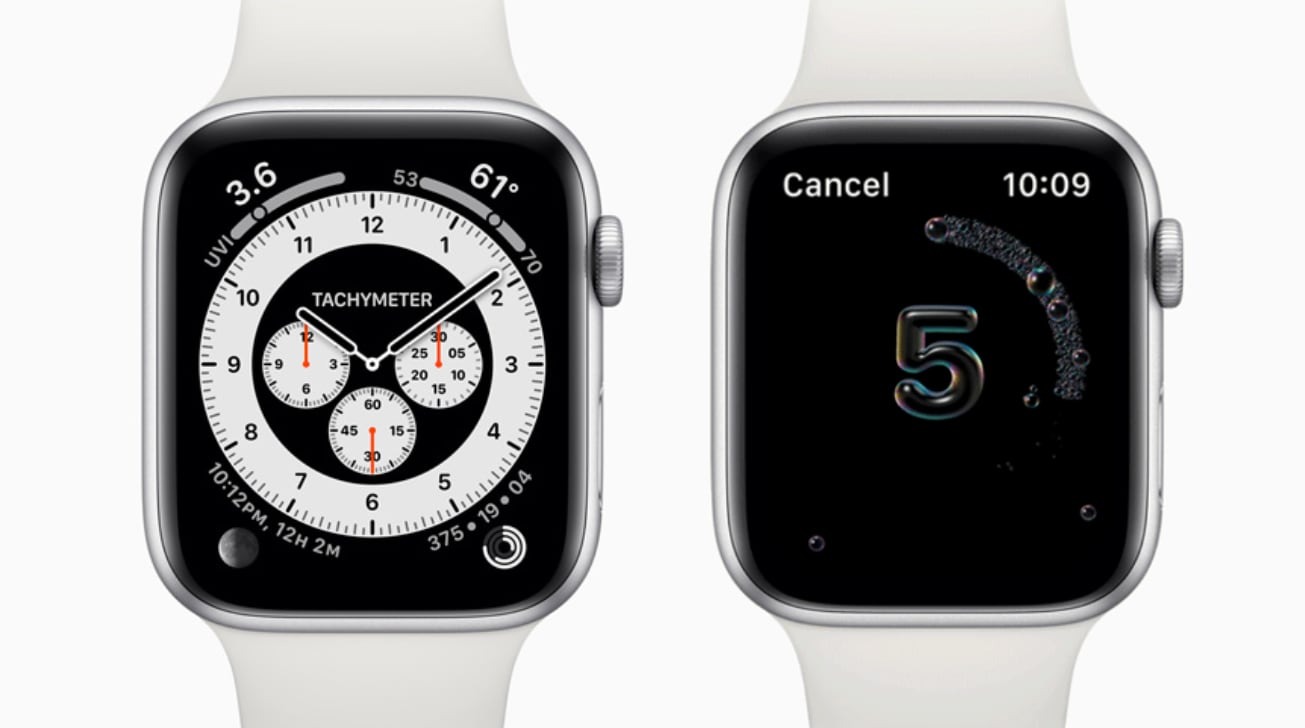 The tachymeter complication and the hand washing features of watchOS 7

When the Apple Watch detects the user is washing hands, such as by hearing running water, the display will show a 20-second timer to ensure the user properly cleans their hands. As with sleep tracking, the Health app will provide details of how often the user washes their hands, as well as offering more tips on limiting the spread of disease.

New methods of working out are included, such as dancing, core training, functional strength training, and cooldowns. These are workout types that aren’t as easily tracked as others that were previously offered.

The new Chronograph Pro watch face adds a tachymeter, used to calculate speed based on the time to travel a fixed distance. Developers can also add more than one complication per app to a single watch face. 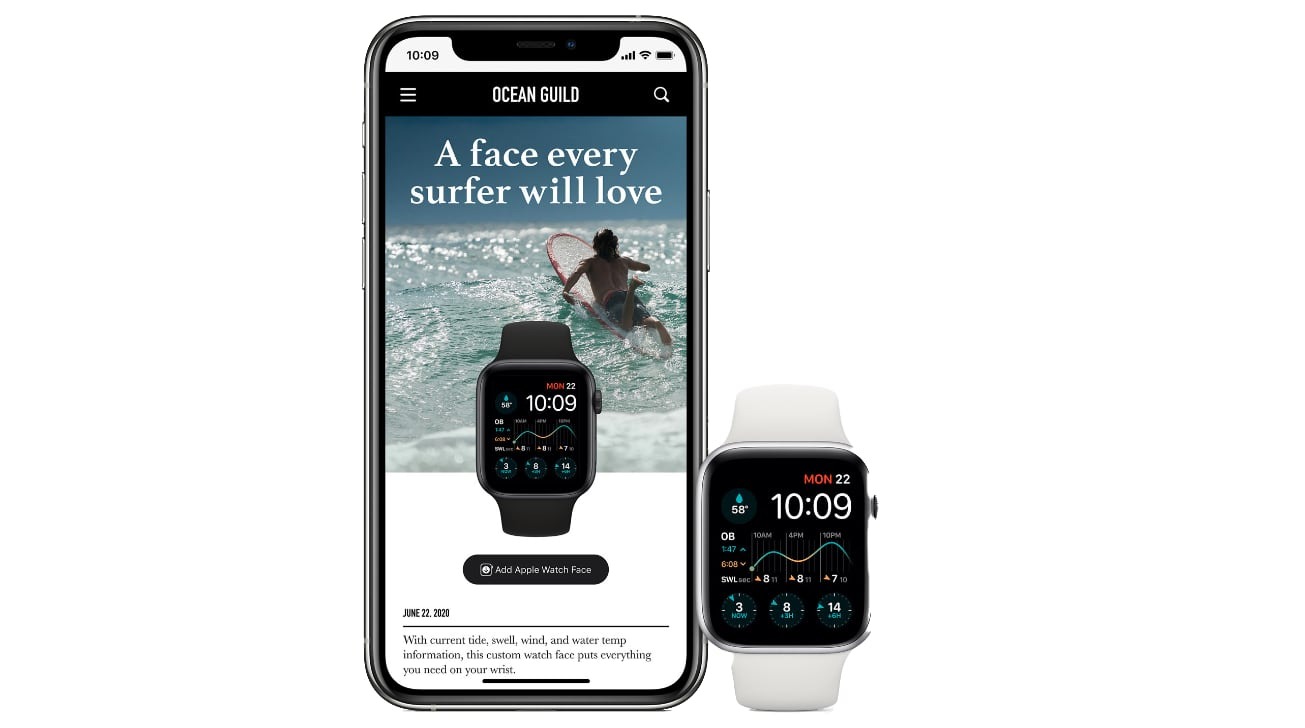 Coinciding with updates made to Apple Maps on iOS, changes are also being made to reflect the Apple Watch experience, including turn-by-turn directions prioritizing cycle routes. This includes being able to exclude routes with stairs, and warnings about steep inclines.

Improvements are being made to how Siri performs on-device dictation, which should help make voice-to-text messaging more accurate. Access to other features including Siri’s new translation features will also be available.