The Apple Watch SE is set to start shipping Friday, September 18, but the first hands-on reviews of Apple’s lower-cost wearable are now appearing online. Several journalists and media outlets were provided with review units, and so far Chris Velazco from Engadget and Victoria Song from Gizmodo have shared their opinions after 24-hours with the wearable. 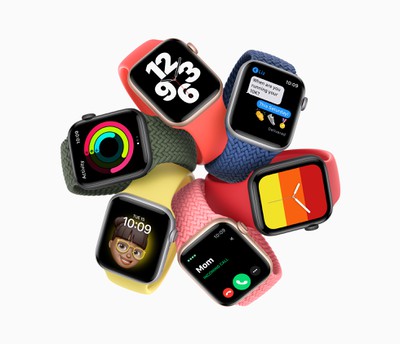 For starters, you’re not getting the electrocardiogram app for atrial fibrillation detection or the new blood oxygen-monitoring sensor. You’re also not getting the always-on screen that was introduced with the Series 5, the Series 6’s faster S6 chip, or the U1 Ultra Wideband chip. From a charging standpoint, the Series 6 will also go from zero to 100% a bit faster at 1.5 hours versus the Watch SE at 2.5 hours. For wifi, the Series 6 supports 2.4GHz and 5GHz, while the SE only supports the former.

In spite of these drawbacks, she was positive about the Apple Watch SE’s performance, and said that “you’re not giving up as much as you might think.”

The S5 chip is, so far, still snappy. I have zero complaints about downloading or launching apps. I’m sure the S6 chip is faster, but the S5 is better than simply “fast enough.” So far, the tilt-to-wake responsiveness for the Watch SE’s display is also pretty great. I’m not sure if it’s just my memory failing me, but it feels faster than I remember it being on the Series 2, 3, and 4. Perhaps it’s the S5 chip?

In terms of performance and battery life Velazco was similarly positive:

In other words, you can expect performance that’s in line with what was — up until just recently — Apple’s flagship wearable. I haven’t had the SE long enough to fully test its battery life, but I easily got a full day of use from the Series 5 when it launched, and the SE might last a little longer since it doesn’t have an always-on display to worry about.

Unsurprisingly, the reviews tended to convey some disappointment about the Apple Watch SE lacking advanced health features such as ECG and blood oxygen monitoring, but ultimately resolved that they were not of vital importance. Song said:

ECG and atrial fibrillation notifications are wonderful innovations. But unless you have a heart condition, or are in the at-risk age range for Afib, it’s not the most necessary feature. Lacking ECG doesn’t mean you won’t get the potentially life-saving warnings if your heart rate suddenly skyrockets or plummets beyond your normal range. That’s something that comes with watchOS—even the Series 3 has that capability. As for blood oxygen-monitoring… this is also a cool innovation that, generally speaking, wearables companies haven’t figured out how to implement in a truly meaningful way just yet… you won’t be missing out on the vast majority of what makes an Apple Watch great if you don’t have blood oxygen-monitoring.

Velazo echoed the sentiments, saying that Apple Watch SE “still has most of the health-focused features Apple has rolled out in the past few years, like fall detection, alerts for excessive ambient noise, and non-ECG-based heart rate monitoring.”

Overall, Velazco described the SE as “a mixed bag of the best parts and features from the last few years of Apple Watch history,” and notes that it is “surprisingly similar” to the high-end Apple Watch Series 6. Song said that the Apple Watch SE “feels like an extremely good deal… Apple may have a real affordable winner on its hands.”

More detailed, longer-form reviews of the Apple Watch SE will be arriving soon.