There are plenty of graphics tablets out there, but which one is right for you? Whether you’re drawing, designing, or editing, a lot of graphics tablets can seem pretty similar at first glance. However, there are important differences between various tablets that make some worth picking over others.

Graphics tablets can commonly be confused with drawing tablets, but there’s a simple way to differentiate them: Drawing tablets have screens, while graphic tablets don’t. This may make graphics tablets seem worse right off the bat, but that depends on what you want to use the tablet for.

If you’re drawing digital art, then obviously the drawing tablet will be better because you can see your pen affect the canvas without looking up at a separate screen. And to be clear, drawing tablets can do everything a graphics tablet can. However, if you want to use the tablet as an alternative for a mouse in various programs, then you don’t need the dedicated screen on the tablet. This is great because even the cheapest drawing tablets cost significantly more than most graphics tablets.

That doesn’t mean you can’t draw with a graphics tablet, but they’re mostly used in fields like graphic design, video/audio editing, and photo editing, alongside general computer navigation. Sometimes this is because of certain advantages the pen input grants, other times it’s just because using a pen for extended periods is more comfortable than a normal mouse.

Regardless of why you want a graphics tablet, there are a few things you should look out for when considering which one to buy:

Best for Most People: Wacom Intuos

Wacom is known for its high-quality drawing and graphics tablets, so the entry-level Intuos tablet is a great starting point for most people. It’s a fairly simple tablet with 4,096 levels of pressure sensitivity, four or five shortcut keys along the top of the tablet (depends on what size you get), and a battery-free pen. It comes in two sizes: small (workspace area of 6 x 3.7 inches with four buttons) and medium (workspace area of 8.3 x 5.3 inches with five buttons).

The Intuos comes with a two-year license for Clip Studio Paint Pro so you’ll have a drawing program to mess around with right out of the box. You can get the Wacom Intuos in both wired and wireless models. (Wacom says the wireless model should last for a full working day on a full charge.)

For reprogramming the tablet, you’ll need to install the corresponding software from Wacom.

Best for Most People 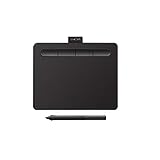 The H640P is a rather impressive tablet for the price, even if it’s fairly standard all things considered. It has six programmable shortcut buttons, a battery-free pen, a workspace of 6.3 x 3.9 inches, and 8,192 levels of pressure sensitivity. For those who want a good tablet at a low price and don’t mind being limited to a fairly small workspace, the H640P is the best option by far. 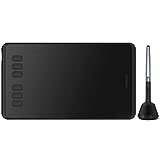 Another tablet from Wacom, and it’s the most expensive tablet on this list. However, the Intuos Pro does have a couple of unique features to justify that price. First off is the programable touch ring, which is great for performing actions like scrolling and rotating quickly and intuitively. Secondly, you can switch the tablet between pen mode and multi-touch mode with the flip of a switch. In multi-touch mode, you can use the tablet like a normal touchscreen with all your fingers at once. You can also purchase separate surface boards for the Intuos Pro, which alter the texture of the tablet significantly (such as making it more coarse or smooth).

For reprogramming the tablet, you’ll need to install the corresponding software from Wacom. 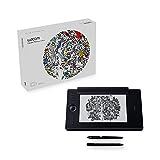 As a middle ground between the low and high ends, the XP-Pen Deco 03 offers some nice features to give you more options while using the tablet. Most notably, the programmable multi-function dial on the top-left corner of the tablet. There are also six quick-access buttons, a battery-free pen, and a total workspace of 10 x 5.62 inches. The Deco 03 can also connect either wired or wirelessly (wireless requires the use of the included USB-A adapter).

For reprogramming the tablet, you’ll need to install the corresponding software from XP-Pen.

If you’re brand new to graphics tablets, the H420 is a small and simple tablet that also comes with a small kit of accessories that you would likely buy anyway. You get a cleaning kit, carrying case, and a glove to wear while using the tablet that will stop your palm from interacting with it. There are three quick-access buttons on the side of the tablet, and it supports 2,048 levels of pressure sensitivity.  The workspace measures at 4 x 2.23 inches, which is fairly small but can still be used effectively in professional work. 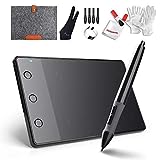 The Inspiroy Ink H230M is an interesting tablet; on one side it has the standard graphics tablet surface you would expect, but on the other, there’s an LCD panel that can be manipulated by the pen. This allows you to quickly sketch out things or jot down quick notes on the LCD panel before resetting it to allow for new sketches and notes. (Note: There’s no way to save those sketches and notes.) It’s a unique and kind of niche feature, but if having a small resettable notepad lying on your desk while working sounds useful, then the Ink H230M could be the tablet for you.

Besides that, the Ink H230M is fairly standard but still good tablet: It has 11 programmable quick-access buttons, recognizes 8,192 levels of pressure sensitivity, and a 9 x 5.62-inch workspace. It comes in “Coral Red” (pictured above) and black. The LCD panel requires a CR2025 cell battery to operate, which is estimated to last about a year or two depending on use. 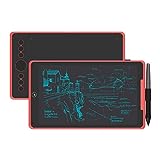