Apple in iOS and iPadOS 14 is allowing third-party apps to be set as alternatives to the default browser apps on the iPhone and the iPad, and now one of the most popular third-party email apps, Gmail, can be set as the default email app on your iOS devices. 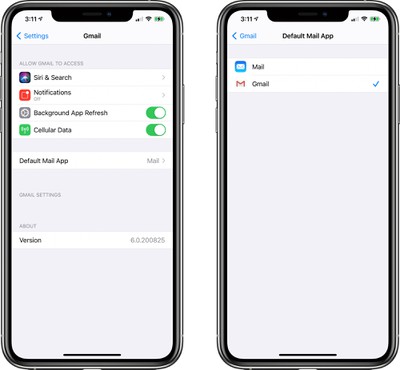 With the latest Gmail for iOS update available in the App Store as of today, Gmail can serve as a replacement for the Mail app.

You can set Gmail as the default email app on your ‌iPhone‌ or ‌iPad‌ by downloading it from the ‌App Store‌, opening up the Settings app, scrolling down to Gmail in the apps list and then tapping on Default Mail App.

Google previously updated Chrome with the default browser function so it can be set to replace Safari on the ‌iPhone‌ and ‌iPad‌. Those who prefer Google’s apps can now have a mostly Google-centric experience on the ‌iPhone‌, at least when it comes to browser and email.

It’s worth noting that there is currently a bug that resets the default apps that have been set to replace Safari and Mail every time a device is rebooted, so Gmail may have to be updated as the default email app whenever you restart your ‌iPhone‌ until Apple fixes the issue.