It’s not the fanciest or the most elaborate improvement that’s come with iOS 14, but it could be the one you use most often. Apple has added one-touch enhancements to all your audio recordings done in Voice Memos.

There are dozens, possibly hundreds of audio recording apps for iPhone, but Apple has raised the bar for all of them with how it’s improved the stock Voice Memos app that comes in iOS 14. Despite the name making it seem like a Dictaphone-style recorder that’s only useful for short dictation, Voice Memo is a full audio recording app.

And it’s now a full audio app with Enhance Recording. Again, despite the name making it sound as if this is a way to improve the quality of anything you record from now on, it’s more than that.

Enhance Recording will improve, or at least attempt to improve, any audio you record now in Voice Memos — or have ever recorded into it. It doesn’t have the kind of fine tuning that a broadcast-quality app would bring, but it will make your next podcast recording sound better.

How to use Enhance Recording in iOS 14

Apart from the magic wand icon highlighting in blue, nothing appears to happen. Tapping Done just takes you back to the list of recordings.

However, if you now tap the Play icon in that recording’s entry in the list, you will normally hear a difference. Your results will vary, and actually they may vary enormously.

What the Enhance Recording does is use Machine Learning to attempt to cut out everything you don’t want to hear, while keeping everything you do. So it is able to remove, or at least reduce, sounds such as background noise.

Similarly, it will do its best to get rid of room reverberation. That’s the faint echo you can’t hear in the room, but which gets faithfully recorded as it bounces back off the walls around you and into the microphone.

You can get very clear improvement, but don’t let us oversell it. At least as often as you hear a dramatic difference, you may not hear any difference at all. 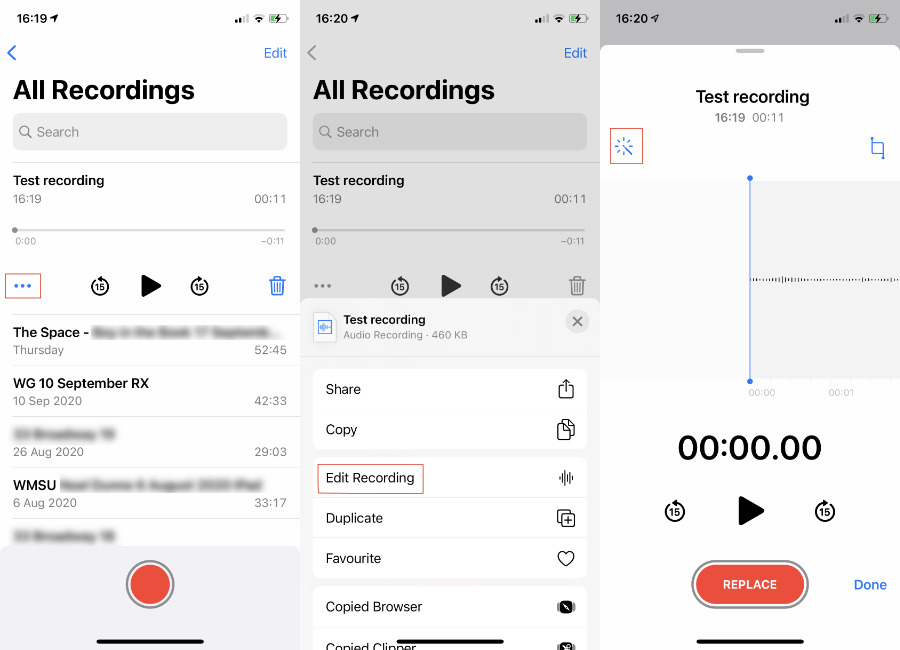 Select a recording, then tap the ellipses. Next tap Edit Recording, and lastly tap the magic wand to turn on enhance recording.

What’s least likely to happen is that you won’t like what you hear. However, in that case you’re in luck because there is one more part to this feature — an undo.

Unlike a regular undo when you might have to remember to choose it right now, you can go back to an enhanced recording at any time and remove those enhancements.

How to remove enhancements

This turns off the enhancements completely. You’ll immediately be able to hear the audio revert to the way you originally had it.

The fact that you can add it and remove it so easily, and the fact that you don’t have to wait while the audio is analyzed, makes it seem as if Enhance Recording is a filter. Effectively it is, it’s like adding a gauzy color over a photo and then removing it later.

What you can’t do

Voice Memo remains a basic audio recording app. Aside from an option to crop or trim the audio — to remove the start or end of a recording — there are no editing features.

To do more on iOS, you need something like the Ferrite audio editing app. However, you can still pass the enhanced Voice Memo recording to that.

And you don’t have to stick to iOS, either. While you can always share an audio file from any iOS app to anywhere you want, Voice Memo is also on macOS.