Apple is working on a type of hinge mechanism for an iPad keyboard case that could fold flatter than standard assemblies, as well as new methods of providing adjustable tactile key feedback.

The first patent, titled “Accessory Devices for Portable Electronic Devices,” details a tablet keyboard case with a new method for offering adjustable viewing positions. Although traditional hinges rely on engagement between a shaft and a clip, the patent outlines a way to different components to mimic the functionality of traditional hinge assemblies.

For example, the new hinge assembly could use two hinge components, connected by a joint, that are generally flat. That’s in contrast to traditional hinges that are usually circular and friction-based. 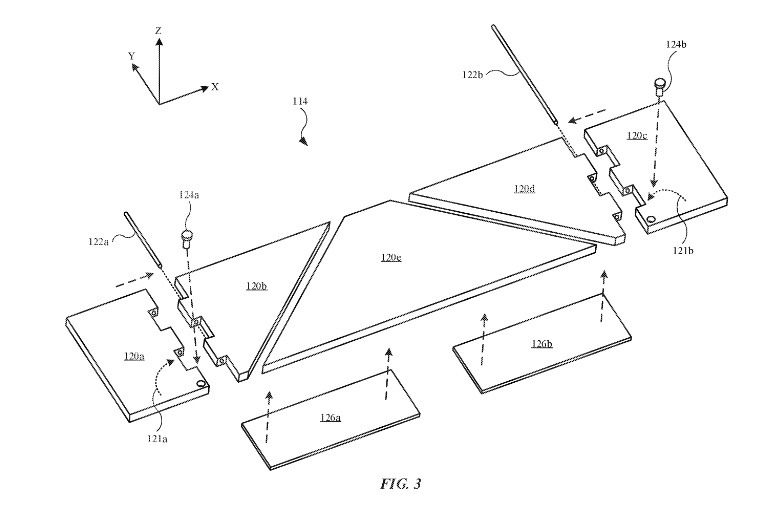 This type of hinge assembly, Apple contends, offers advantages over traditional ones. For one, the flat-style hinge is less dependent on the size of the assembly itself, meaning keyboard devices can be made slimmer and flatter. The patent also notes that the flat hinge assembly could be better hidden from view when folded away. 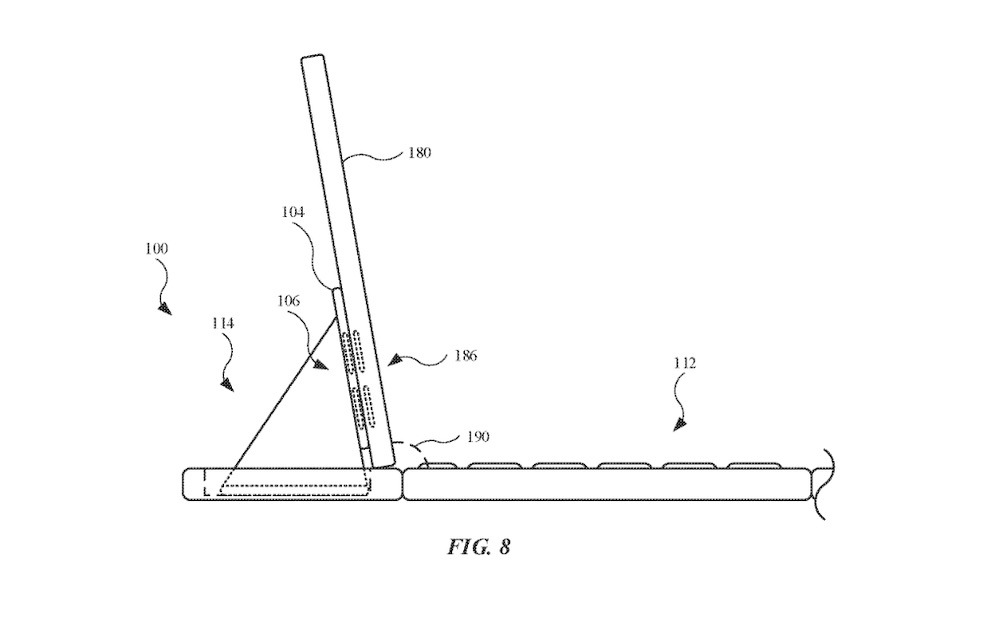 The hinge mechanism holding up an iPad. Credit: Apple/USPTO

Interestingly, patent images also reveal space for an “additional input device,” which could add a touch pad or a dynamic row of input keys to the standard QWERTY keyboard layout.

The patent outlines various internal components that can provide variable tactical force or audible feedback when a user depresses a key. But instead of just offering a single type of feedback for keypresses, the patent details several interesting ways that tactile input can be adjusted.

The patent also notes that keys could use tactile feedback, such as “texture” feel or a feedback bump, to provide a homing function. That would be akin to the small bumps typically present on an F and J keyboard.

Other elements of the patent detail systems that could detect the force of user input, perhaps weeding out false inputs or repetitive keystrokes. Although not strictly an iPad-related patent, the methods could be especially useful on a tablet keyboard case due to their lack of satisfying tactile feedback.

The inventors on this patent are listed as John. A Porcella, Daniel A. Greenberg, and Thomas R. Matzinger. Of them, Porcella has previously worked on Apple patents such as a pair of “smart gloves” and a patent detailing a method for adding screens to a MacBook Pro trackpad.