Apple has decided to temporarily waive the 30 percent cut that it takes from in-app purchases for Facebook’s in-app paid event feature, reports CNBC. Facebook had accused Apple of hurting small businesses by collecting fees from the new feature, which lets users attend online classes and events through Facebook. 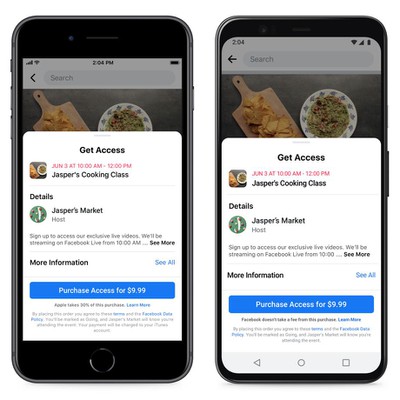 The policy update will pertain to ClassPass and Airbnb, two companies that are also offering new digital experiences and classes within their apps.

An Apple spokesperson said that Apple reversed its decision on the Facebook event fees due to the pandemic and a desire to give companies more time to adapt to digital business models. Apple says that Facebook will not have to pay fees through the end of the year, with Apple to resume taking its standard 30 percent cut in 2021.

Despite the reprieve, Facebook is unhappy that the waived fees are not applicable to gaming businesses that want to sell online access to their events, but Apple says that this is because gaming businesses have always been digital only and have not been affected by the global health crisis.

“This is a difficult time for small businesses and creators, which is why we are not collecting any fees from paid online events while communities remain closed for the pandemic,” Facebook spokesperson Joe Osborne said in a statement. “Apple has agreed to provide a brief, three-month respite after which struggling businesses will have to, yet again, pay Apple the full 30% App Store tax.”

With the in-app purchase Facebook fees waived for now, small business owners who set up online classes or events using the Facebook Paid Events feature in the Facebook app on iPhone or iPad will be able to keep the all of the money customers pay to attend.

Facebook plans to waive its own fees for the Paid Events feature through at least August 2021, even though Apple will begin collecting fees again after December 31.

Apple and Facebook have been feuding over this issue since August, and Apple has struggled with applying ‌App Store‌ rules to businesses that are transitioning from real-world events to online events. ClassPass and Airbnb, for example, used to provide access to real-world events where Apple did not collect fees, but the virtual classes and experiences the two apps now offer are subject to Apple’s standard 30 percent commission.

Until today’s decision to temporarily waive fees through the end of the year, Apple had refused to grant special permission to ClassPass, Facebook, Airbnb, and other similar apps in the name of fairness to other developers who are subject to the fees. Apple in a statement today reiterated its stance: “The ‌App Store‌ provides a great business opportunity for all developers, who use it to reach half a billion visitors each week across 175 countries. To ensure every developer can create and grow a successful business, Apple maintains a clear, consistent set of guidelines that apply equally to everyone.”