Apple appears to have been planning to introduce country-specific Apple Watch bands for the 2020 Summer Olympics in Tokyo, but with the games postponed until 2021 due to the global health crisis, they have yet to be released. 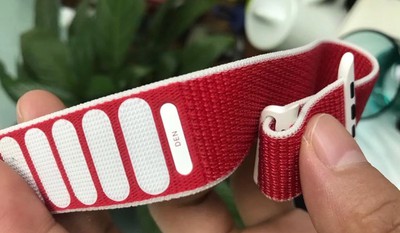 Twitter account L0vetodream shared a few photos of the bands over the weekend, including one for the host country Japan and another for Denmark. The custom Sport Loops were designed to match each country’s national flag, and they each have an abbreviated country name printed on the underside, such as DEN or JPN.

Apple released similar country-specific bands for the 2016 Summer Olympics in Rio de Janeiro, with 14 custom Woven Nylon bands made available for the United States, the United Kingdom, the Netherlands, South Africa, New Zealand, Mexico, Japan, Jamaica, Canada, China, Brazil, Australia, Germany, and France. The bands were available to the public at only one Apple Store in Rio de Janeiro, retailing for $49 each.