Convenience is everything these days. From two-day delivery from Amazon to nearly instant food delivery from businesses like Grubhub, anything that saves us time or money or effort is worth the cost. And that’s precisely why the dedicated Netflix button that’s on seemingly every remote control is so fascinating.

Why Make a Dedicated Button?

In 2011, Netflix announced its forthcoming appearance on remote controls for TVs and set-top boxes from several major electronics companies. In the press release, Netflix stated that “streaming from Netflix on TVs will soon be as easy as one click of a remote control,” promising convenience to the streaming service’s customers. No longer was there a need to go through a dozen steps to get the service up and running—simply press the button to launch the Netflix app.

So, the announcement wasn’t just one of a simple button—it was the announcement of a sweeping partnership of the biggest electronics companies to put a couple of brand names into the homes of consumers before they ever knew it. No one ever asks to see the remote control that accompanies a TV at the store; rather, it’s something that just comes with it that you’re probably going to use for five years or even a decade.

That’s not to call out Netflix specifically, though. Tons of other companies have also vied for the coveted product placement over the years—like Hulu, YouTube, Crackle, Sling TV, and others). Netflix was simply the first to do so. That’s exactly why the Netflix button made a splash when it first appeared in 2011, and one of many reasons why the streaming video service is a well-embedded household name today.

All of this simply boils down to brand visibility and money. The companies who make TVs and other electronics can charge these services a small fortune in order for their names to be featured on these remote controls. It doesn’t matter much whether consumers use the button. It’s that Netflix and these other streaming services found a way to advertise their brand inside the homes of consumers every day without lifting a finger.

An article from Bloomberg Businessweek stated that “Hulu, Netflix, Showtime, and YouTube have paid Roku to build brand-specific buttons on its remote controls; these lead users straight to those services. At $1 per customer for each button, the cost can quickly add up to millions of dollars in monthly fees.”

With the trade-off of convenience for long-term brand visibility, this marketing scheme is brilliant. The button is a subtle reminder to those who don’t have one of these services that they should probably sign up for them, and those who already do should log in and use them.

Can You Reprogram the Buttons?

While it’s a highly sought-after option, you can’t reprogram the Netflix button (or others) in most cases. They were specifically designed by TV manufacturers and have hard-encoded IR or RF codes built into the remote’s firmware. Unless the manufacturer decides to release an update that allows users to control what the button does, there won’t be a way around it.

However, someone did figure out a way to remap the Netflix button on the NVIDIA Shield TV and the Shield TV Pro remote in late 2019. It’s not a native option within the device’s software, but an app called Button Mapper (Android only) lets you remap the button. So if you have the Shield TV, congratulations, you’re in luck.

But everyone else? Sorry.

What Are Your Alternatives?

Because it isn’t possible to reprogram these thumb-sized billboards (unless you have expert coding and electronics engineering skills), you might be wondering what other options are available. There’s always the choice to ignore them, or you can cave in and sign up for the suggested services so you can enjoy quickly accessing them with the button.

Or, you could switch remotes and upgrade to a universal remote. These completely remove the option of hard-coded buttons for these services, thus fixing the problem. Most can even control additional electronics in your home’s entertainment center—like Blu-ray players, satellite boxes, soundbars, and more—which ultimately makes for a more streamlined set up anyway.

If you do want to make the jump, we found a few solid choices. They range from the inexpensive and ultra-simple, to pricier premium remotes loaded with features and functionality.

The GE Universal Remote Control works with up to four video and audio components, so you can control your TV, disc players, satellite box, and Roku stick with a single remote. It is preprogrammed to work with Samsung TVs and Roku boxes, but it can work with devices from any major brand. The remote comes in five colors, and is easy to set up and program. 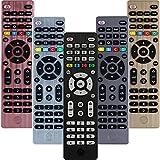 This simple universal remote can work with your TV and with a variety of other electronics.

With the Logitech Harmony 665, you can start watching TV, listening to music, or watching a movie with the press of a single Activity button. Pressing one of these buttons turns on the corresponding electronics, so all you have to do is kick back and relax. It can replace up to 10 remotes, so you can control your sound system, gaming console, disc players, TV, and more with a single remote.

The Harmony 665 is compatible with over 270,000 devices from more than 6,000 brands, so it’s ready to be used in your living room today. And with more devices being added every day, the remote will stay compatible as you upgrade your electronics. The remote is backlit for easy button identification in the dark, and you can customize up to 23 channels on the remote’s small color screen.

The Logitech Harmony 950 is an exciting universal remote. It is compatible with over 270,000 entertainment devices like gaming consoles and CD players from more than 6,000 brands, so it can centralize your home’s existing entertainment center for real convenience. You can create a custom activity with the remote like “Play Games,” and when you press it the remote automatically turns on the appropriate devices exactly to your specifications.

The Harmony 950 also has a built-in 2.4-inch color touchscreen, so you can easily scroll through your favorite channels, activities, devices, and controls. Built-in motion-activated backlit controls ensure you’ll never fumble around the dark, and vibration feedback lets you know when the button is successfully pressed. It also comes with a small charging station.