AMC+, which includes content from AMC, BBC America, IFC, and SundanceTV, is available through the Channels feature in the Apple TV app as of today, according to AdWeek. 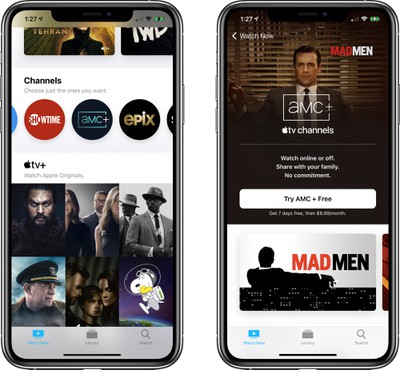 AMC+ provides access to ad-free programming from AMC channels and other streaming services like Shudder, Sundance Now, and IFC Films Unlimited, AMC library shows, and early access to AMC series before they air on TV. It also includes on-demand content and live feeds of AMC, BBC America, IFC, and Sundance, though live content will include ads.

Prior to today, AMC+ was limited to Comcast, Dish, and SlingTV subscribers, but there was no standalone option that did not involve a cable subscription. Subscribing to AMC+ through ‌Apple TV‌ Channels will cost $8.99 per month, with a 7-day free trial available to test it out. The service is also available through Amazon Prime Video.

Apple introduced the Channels feature in a revamped ‌Apple TV‌ app that came out in early 2019, providing a way for ‌Apple TV‌ users to subscribe to standalone services right in the TV app. There are several Channels available such as CBS All Access, Showtime, Epix, Starz, Cinemax, and more.