A future MacBook Pro may do away with mechanical keyboard mechanisms entirely to eliminate issues with debris, by using a force-sensitive surface on a flexible area of the MacBook’s casing to mimic the pressing of keys.

Over the years, Apple has received complaints about its MacBook Pro keyboards, especially for the butterfly mechanism, with key death being an issue among users. The ability for the mechanism to be jammed up with debris led to Apple introducing a membrane in 2018, but even that inclusion wasn’t enough for it to rethink its key mechanism usage.

The main issue is that it is practically impossible for Apple to create a keyboard that can be protected from the elements using conventional keyboard design techniques. Even if Apple internalizes most of the mechanism, there still has to be a protrusion to allow the externally-facing key to actuate, with the required holes being an entrypoint for debris.

While it is plausible to switch over to a display-style keyboard, as it has suggested in the past, this may not be desirable for end users. The result could be similar to typing on an iPad’s display, with the lack of tactile feedback likely to be an issue.

In a patent granted by the US Patent and Trademark Office on Tuesday titled “Configurable force-sensitive input structure for electronic devices,” Apple proposes that the keyboard and trackpad on devices like a MacBook could still be chained by a touch-sensitive layer. In this particular case, it would use force sensing to detect key presses, rather than typical touch-sensitive technology. 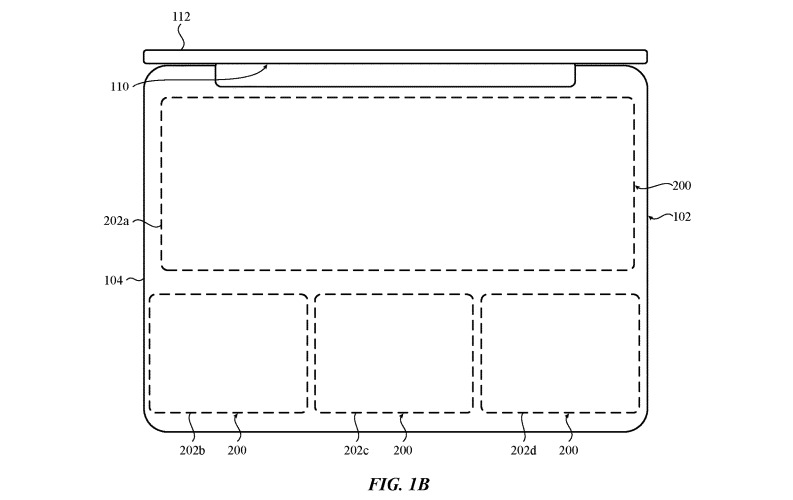 Areas of a MacBook’s main surface that could be defined for a keyboard or trackpad.

Apple’s system would consist of an exterior surface for the keyboard having a defined virtual key region, complete with a lighting system within the casing to illuminate the keys. Using a transparent light guide that can be deformed by pressure, the keys can be lit individually, and could feasibly be set to display many different alphabets and layouts.

The surface would include the use of deformable sections, with the casing covering the light guide then an input stack, with all capable of being deformed based on the input of the user. The input stack would consist of a drive layer and a sense layer, with a processor configured to confirm a user input once a level of capacitance from pressure reaches a desired threshold.

In effect, the pressing of a finger on a virtual key would deform the surface and generate a force, which is measured and then determined to be a key press. This value of the pressed key is then sent to the rest of the system for further use.

While the mention of a deformable layer would suggest the use of plastics and other materials, it is still entirely plausible for it to be made from metal, allowing the entire surface of the MacBook Pro to remain one material.

Furthermore, while the use of a light guide will help determine the positioning of keys and values, it is also feasible for the same guide to be used to change what areas are used for different tasks. For example, the system could swap out the keyboard layout in favor of a very large trackpad, which would be outlined by the light guide.

The stack of components used to create the deformable keyboard layer.

It doesn’t even necessarily require the elimination of physical keys, as it would be possible to simply apply a layer of keys on top of their respective virtual versions, which will detect pressure from a user typing the physical version.

The patent was filed in July 2017, and lists its inventors as John B. Morrell, Ron A. Hopkinson, Peter M. Arnold, Mikael M. Silvanto, and William F. Leggett.

Apple files numerous patent applications on a weekly basis, but while the existence of a filing indicates areas of interest for Apple’s research and development teams, it doesn’t guarantee the appearance in a future product or service.

Apple has explored the idea of alternative keyboard systems for quite some time, both in terms of retaining a mechanical keyboard and replacing it.

On the mechanical side, it has suggested new mechanisms to reduce the thickness of the components, and the use of light as part of an “optical keyboard” mechanism. A hinged mechanism could even raise the angle of the keyboard and the height of the display to make it more ergonomically sound.

Apple has also suggested the use of a hinged OLED screen as a dynamic keyboard, and a “keyless keyboard” that follows the same idea with force sensing and haptic feedback, namely actuators to vibrate the device to mimic keystrokes.