Apple’s latest 10.2-inch iPad sticks with the familiar this generation, focusing on performance above all else — and is exactly what its target audience needs.

The 2020 incarnation of the iPad has little to offer in terms of new features. It is designed with a purpose and audience in mind, and one that Apple focuses on with precision.

Apple saves its most exciting changes for its newest high-end tablets, and the 2020 10.2-inch iPad is not that. This allows the company to trickle-down the best or most useful features to its low-cost iPad that is frequently adopted by kids, families, schools, and businesses who need a capable, no-frills device that will get the job done.

That includes the overall design of the body, the screen itself, and authentication methods. It’s more apparent than ever this year with the iPad Air that debuted with a squared-off body and Liquid Retina display that first showed up with the iPad Pro. Apple even ditched the Home button on the iPad Air, though Face ID still remains for the iPad Pro.

This eighth-generation iPad has only adopted one major advantage from the devices before it — the processor. Otherwise, it is the same iPad you’ve known for years.

There isn’t much new to say this year on the iPad’s deign. Go read our review of the 2019 iPad 7th-generation, and other than performance, it would all remain relevant to this 2020 model. The design in 2020 is the exact same, year-over-year. It still has a 10.2-inch non-laminated 2160×1620 Retina display placed into an aluminum body. 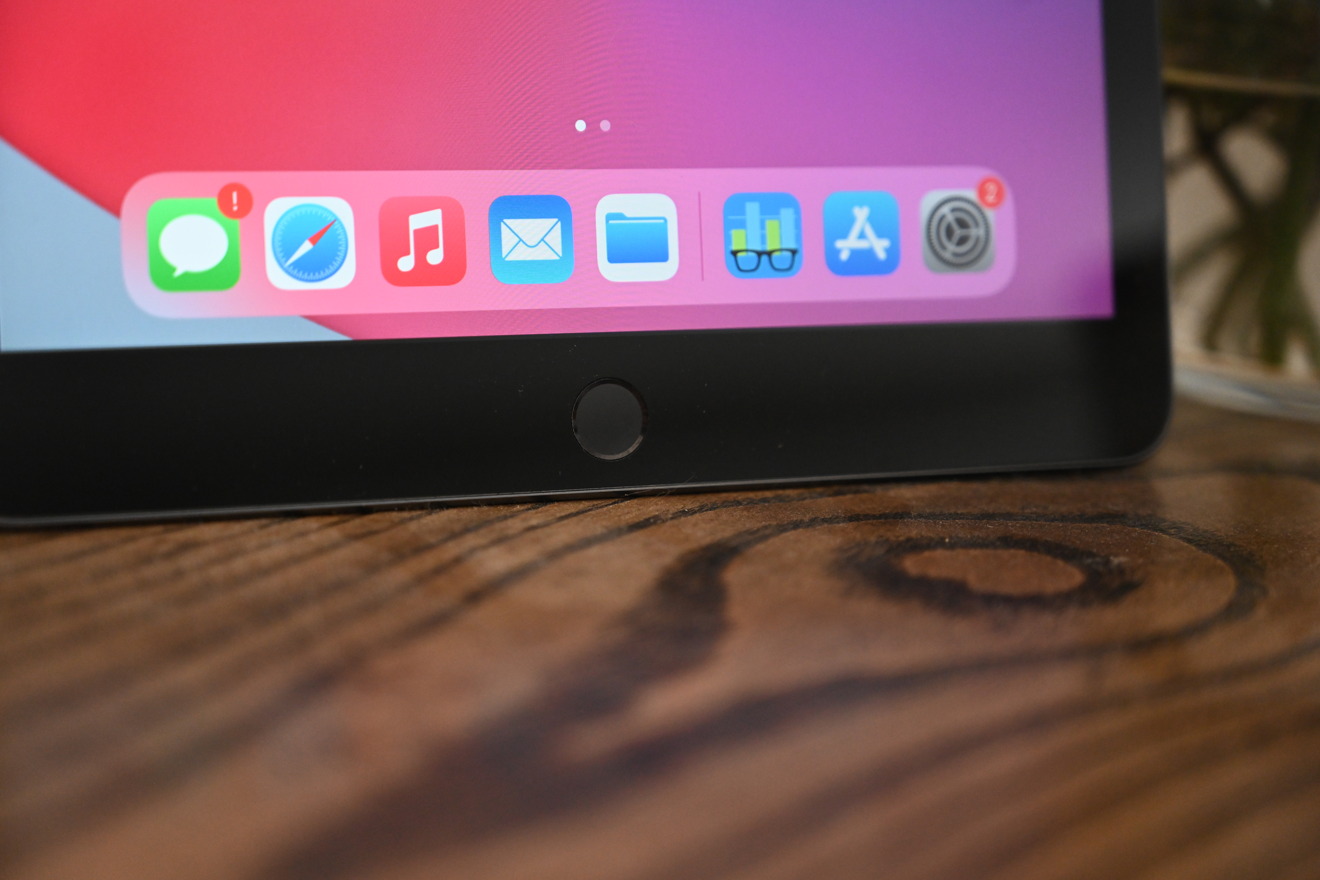 The Home button persists as does Touch ID. There are still two speakers on the bottom and a 1.2-megapixel front-facing camera that feels inadequate in our current Zoom-based world. 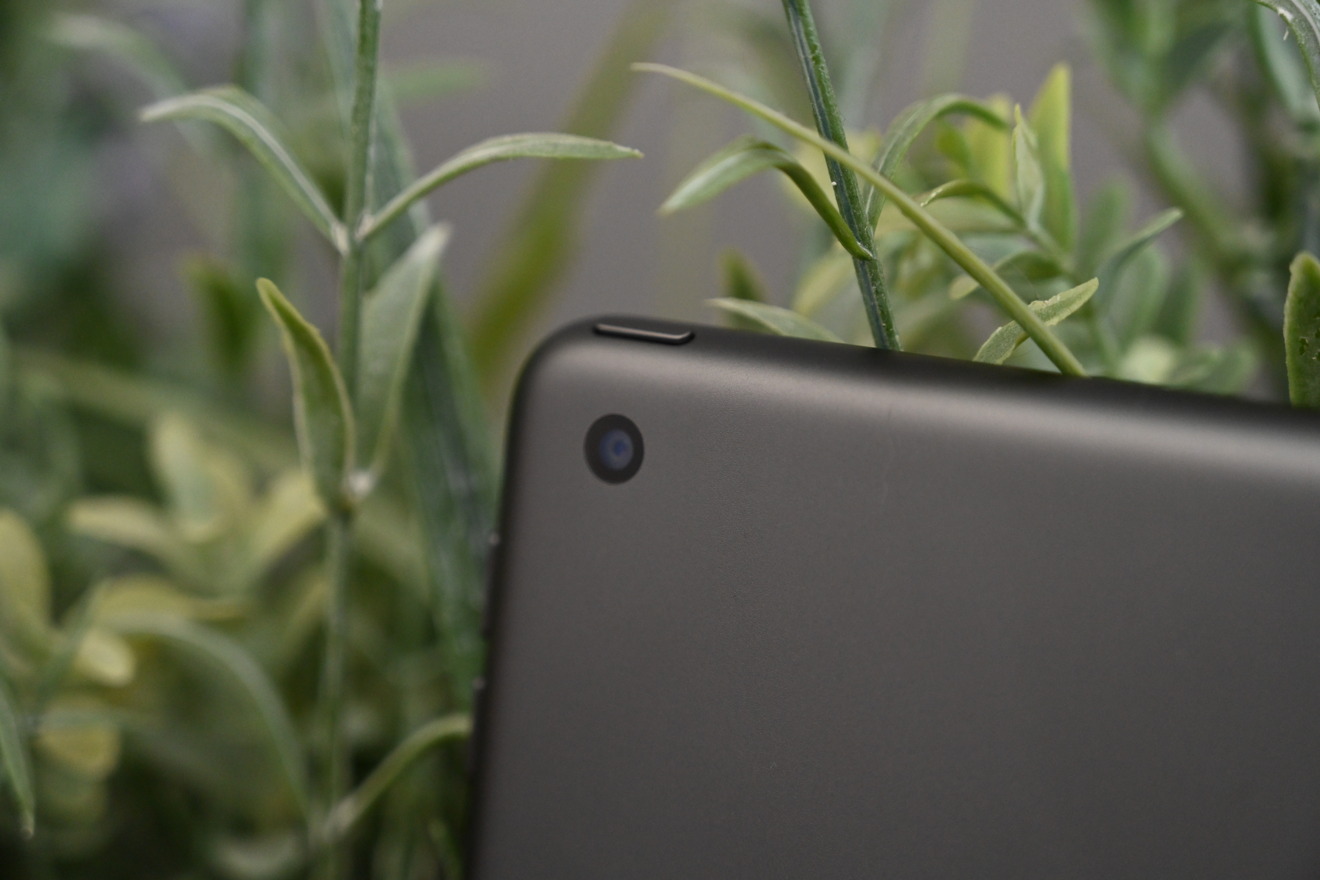 8th-gen iPad has the same camera

The rear-facing camera is the same 8-megapixel BSI module has been around since 2018, using a five-element lens that can capture HDR photos 43MP panorama shots, and can film at 1080p with 120 frames per second slo-mo at 720p.

It still features Bluetooth version 4,2, Wi-Fi is still 802.11ac, and Apple’s infamous U1 chip is no where to be found.

There is still the Smart Connector on the side for use with the Smart Keyboard and the few other third-party keyboards that use the connector instead of Bluetooth. There is also support for the first-generation Apple Pencil which charges from the iPad’s Lightning port.

What is primarily comes down to for the updated eighth-generation iPad, is performance. That’s the name of the game here and Apple, of course, was able to follow through. Unsurprisingly it isn’t the same beefy A14 Bionic processor found on the latest iPad Airs, but it is more than enough to get the task done.

It has gone from an A10 Fusion processor to the A12 Bionic processor. The A10 is a quad-core chip consisting of two high efficiency and two high-performance cores. In use, only two cores can be active at once — effectively making it a dual-core chip when it comes to benchmarks.

The A12 Bionic has six cores — two high performance and four tempest cores — all of which can run at once, showing as a six-core design in benchmarks such as Geekbench. The A12Z Bionic processor found in the latest iPad Pros is similar but has additional graphics cores, showing as an eight-core design. 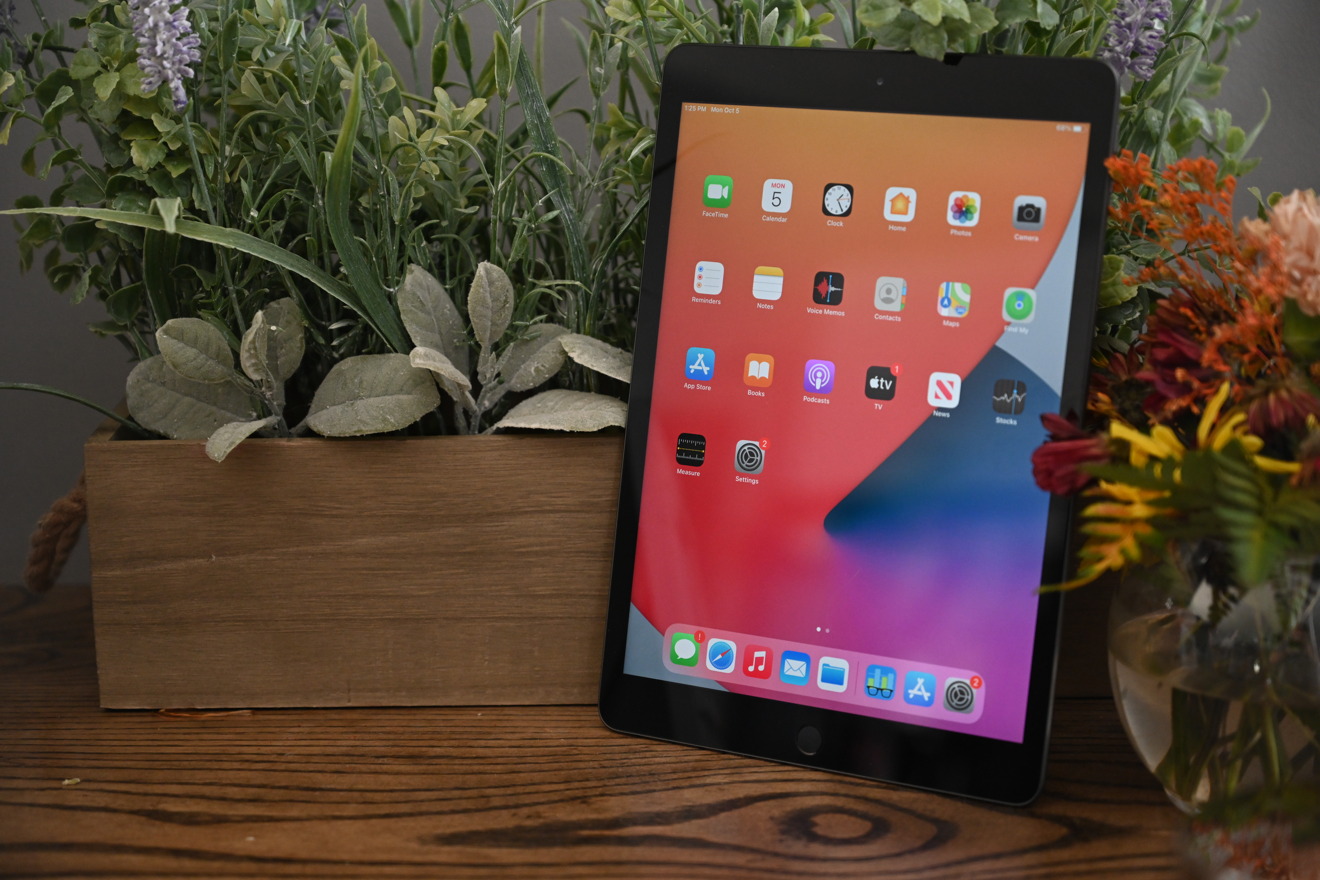 Display on the 8th-gen iPad

In the latest Geekbench 5.2 tests, the seventh-gen iPad from 2019 earned a 746 single-core and 1326 multi-core score. The new iPad earned a 1117 and 2645 on the single and multi-core tests respectively. For comparison’s sake, our 2020 iPad Pro with its A12Z Bionic processor scored a 1117 single-core and a 4690 multi-core. As a general rule, casual iPad tasks only use a single core, making the multi-core score for that market mostly moot.

For the Compute Metal graphics test, we saw 5366 on the new iPad eighth-generation. Our 2020 iPad Pro delivered 12021, mostly due to its additional graphics cores.

What we miss from the iPad Air and iPad Pro

We’ve been steadfast iPad Pro users since they launched and have come accustomed to many of the Pro-specific features. The last couple weeks we’ve been using the new iPad and there are a few things we very much miss — and many we don’t.

Just because we miss these features doesn’t mean the iPad is in the wrong, rather it justifies our choice to go for the iPad Pro. Most of the features were all “nice-to-have” features that aren’t essential by any means.

Face ID makes unlocking, authenticating apps, and more much more seamless. We don’t have to physically interact with the iPad in any way to use Face ID — except when making a purchase. So having to press the Home button with our finger constantly when we have to get into the iPad, go to the Home screen, or enter a password just seems tedious on a device with a larger form-factor than an iPhone.

Sound is also hollow and one-sided. Watching movies with the large bezels, non-laminated display, and shallow audio wasn’t nearly as good of an experience as it is on the iPad Pro.

We were a little surprised we didn’t miss our Magic Keyboard more than we did. We instead opted for an Apple Magic Mouse and a Bluetooth keyboard with our iPad propped up with the Smart Cover. This was a great experience that worked out well for us.

With this setup, the iPad could be a bit further away and Apple’s Bluetooth mouse is just as responsive as the Magic Keyboard’s. We may have missed the all-in-one design a bit more if we traveled more to get work done. 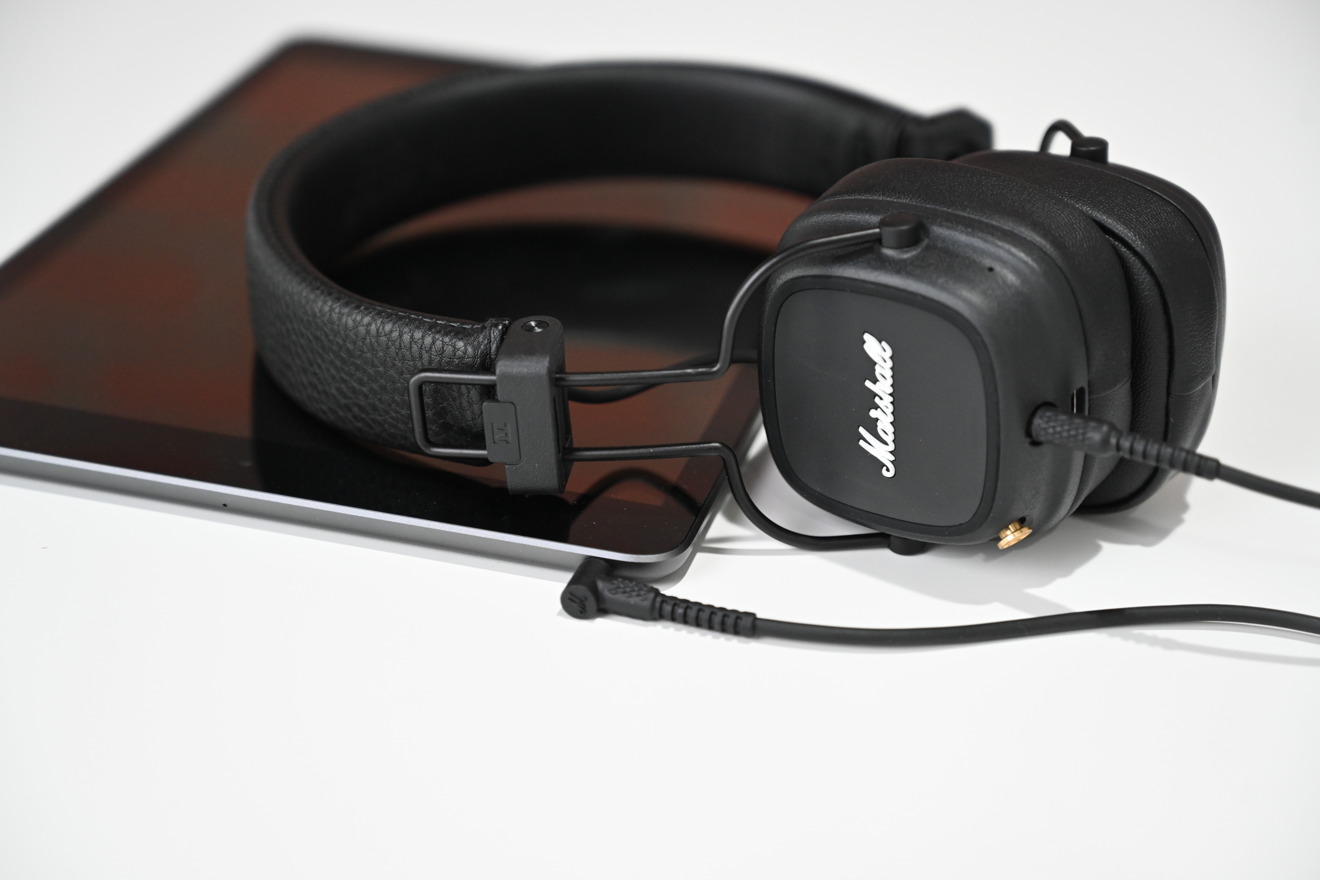 The 8th-gen iPad still has a headphone jack

As we got into heavy lifting on our iPad — editing massive 45mb RAW photos or exporting 4K videos we noticed the difference in speed, but everyday tasks are all single-core operations that were near as speedy as our 2020 iPad Pros. Opening apps, browsing online, shopping, editing documents, sorting photos, hitting up Twitter, dealing with emails, and jumping on Zoom calls all seem near as fast as our Pro.

One note on Zoom, the front-facing 1.2MP camera at 720p is rather low resolution for video calls, and when using the iPad in landscape mode it makes centering yourself on camera more difficult. When the iPad is horizontal, the camera is on the side rather than centered on the top, making you off-center when sitting square in front of the tablet. Using the Smart Cover made things easier so we could twist the iPad so we were as close to center as possible.

On the iPad, Apple sticking with Lightning is a choice that Apple can’t win. On the lower end of Apple’s devices, Lightning prevails.

On the higher end, USB-C is the name of the game, and a cross-platform standard. Storage devices, our camera, and more are all USB-C which meant that while we were testing the iPad, we needed an adapter every time we connected those higher-end accessories.

When we wanted to import photos onto an external drive, we had to connect our camera, save them locally, disconnect and the camera and connect our SSD, transfer the photos to the drive, then delete them from the local folder. This isn’t nearly as seamless on Lightning versus the same workflow with USB-C.

Using this smaller, slower iPad daily with “Pro” workflows eventually felt like a chore and required multiple steps or workarounds to get things done that we didn’t need on the iPad Pro. But if you don’t partake in those tasks, you won’t notice a massive difference — which is exactly why this unexciting iPad is so good.

Should you buy the eighth-generation iPad? 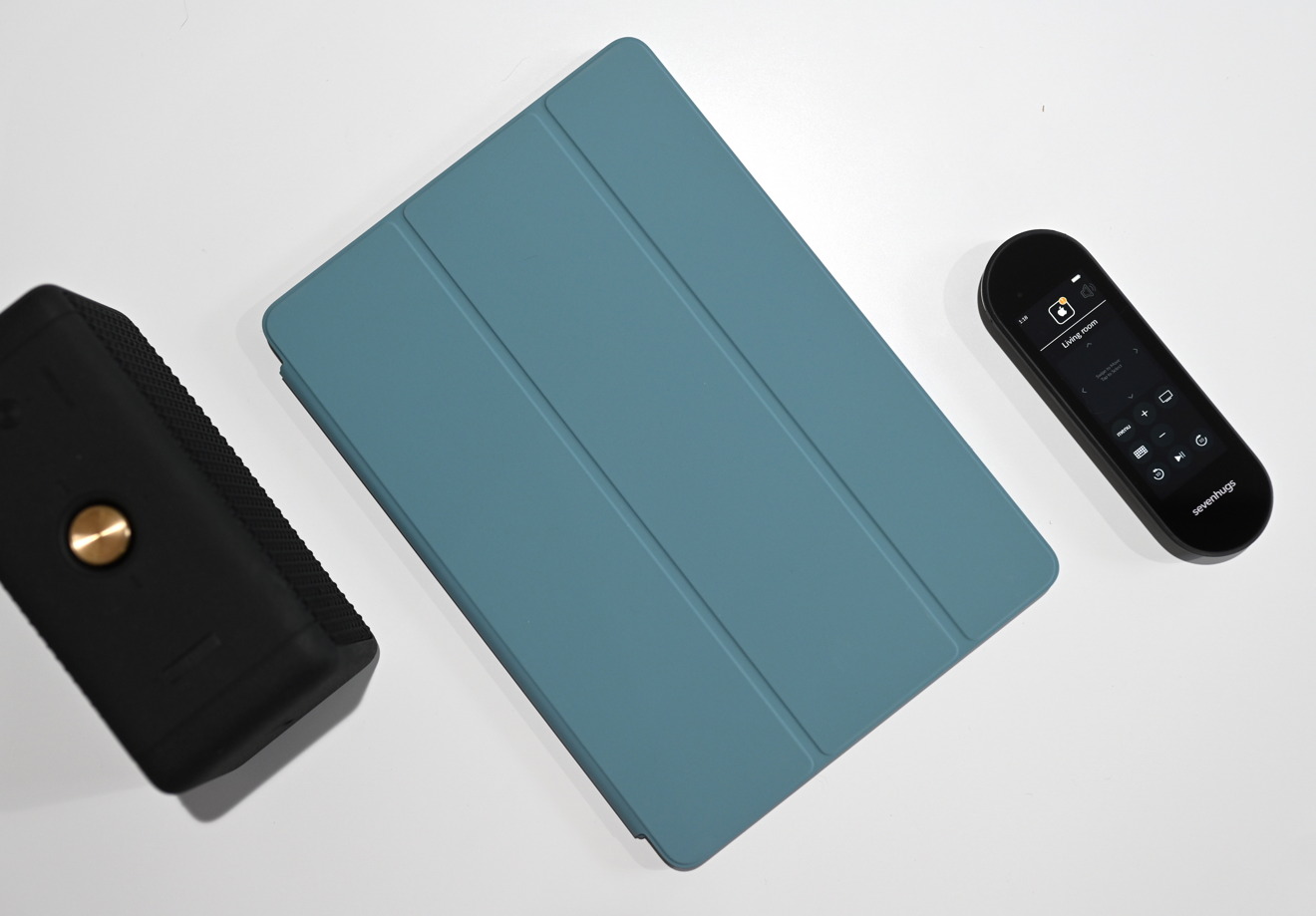 iPad in a Smart Cover

There is a clear market for the basic iPad. It is for those users who want a surprisingly powerful tablet to get the job done — be it school work, notes, emails, a commercial store register, or just browsing the news — and want it to last for several years. You don’t need Face ID, an extra set of speakers, or thinner bezels.

It’s a mobile workhorse that is exactly what you need and little else. That is what Apple has delivered here. It has the same single-core performance as the latest iPad Pros which will guarantee its use for years to come.

There are certainly things that could be better, like maybe a USB-C connector rather than Lightning, but that is more for convenience’s sake these days rather than the functional needs of Pros. Apple at least took a half-step in the right direction here by including a powerful 20W USB-C power brick and a USB-C to Lightning cable in the box. 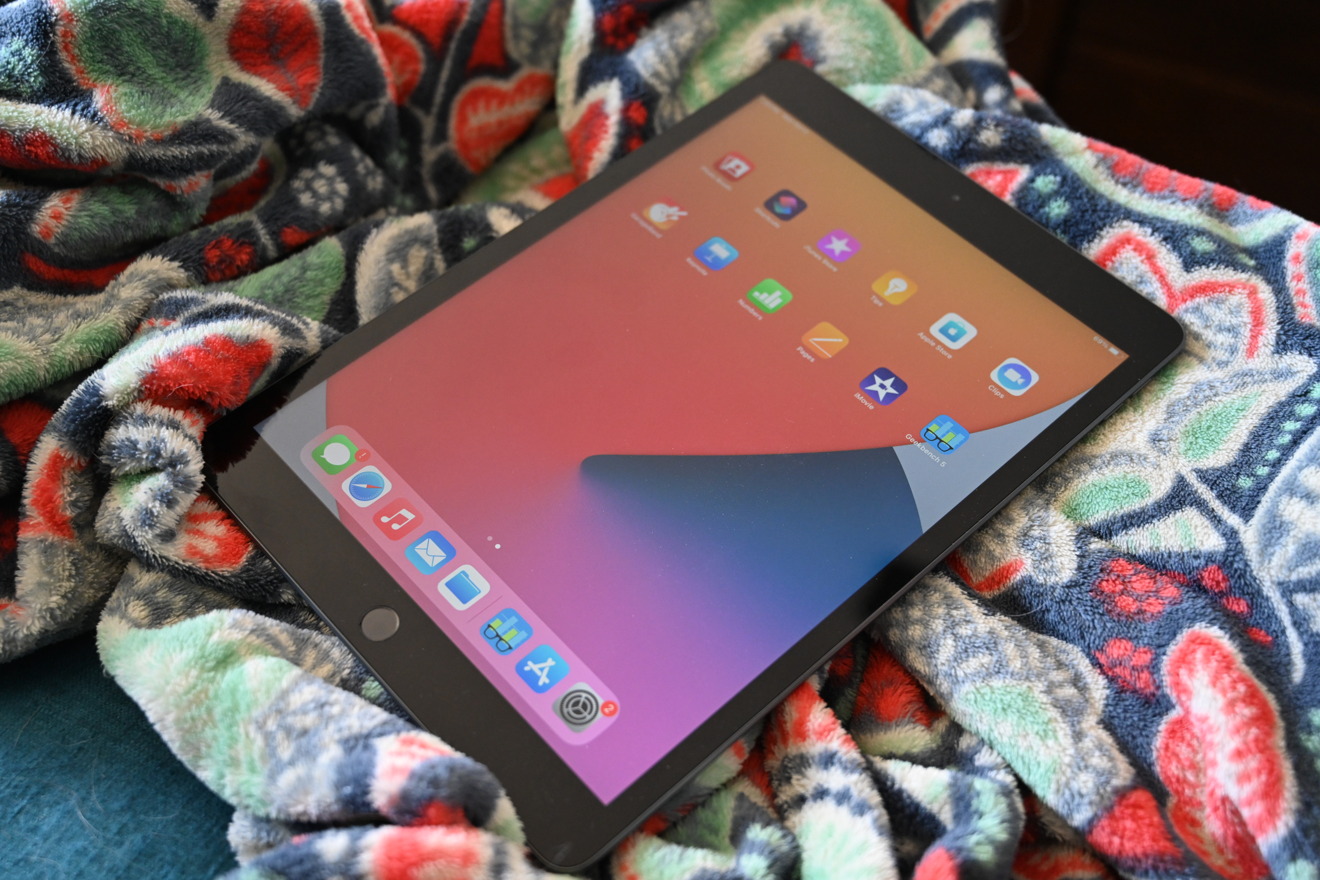 Relaxing on the couch with the new 8th-gen iPad

If you don’t mind the compromises on features and dated look of the tablet, the new eighth-generation iPad is a solid buy — just make sure you have enough storage.

Where to buy the new iPad

Apple’s 2020 iPad is already on sale, with 8th Generation iPad prices falling to as low as $299. Be sure to check out the AppleInsider iPad Price Guide for up-to-date deals and discounts on every capacity and finish.