Apple Music received a redesign in iOS 14 with a more personalized Listen Now tab, an improved search experience, autoplay functionality, and more, and these features have just been rolled out to the Android version of the app. 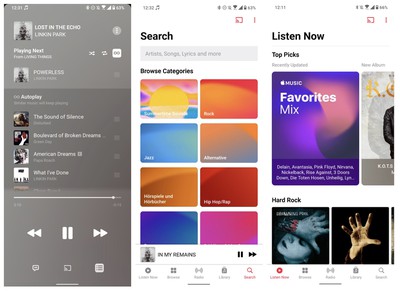 Apple Music for Android version 3.4 during beta testing via Android Police
Version 3.4 of Apple Music for Android has also gained a crossfade feature. When enabled through the app’s playback settings, songs will overlap and crossfade, with users able to set a crossfade duration of up to 12 seconds. Interestingly, this feature is not available in Apple Music on the iPhone or iPad, although it is an option in the Music app on Mac.

According to the Play Store release notes, Apple Music for Android has also gained sharing to Instagram, Facebook, and Snapchat Stories, as well as improved app performance. There’s also a security patch, according to an Apple support document.