Displays and bulbs typically emit light in more wavelengths, and in more directions, than a user will see. Apple is looking to minimize unseen, unused energy and so produce displays that are more efficient — and consequently save power.

“Electronic Device Having Emissive Display With Light Recycling,” is a newly-revealed patent application that explores adding such an efficient screen to a device. Apple goes to some lengths to make sure this application covers every conceivable device from a phone, to a head-mounted display, or even a watch.

Apple is similarly casting its net wide by even listing the types of materials that may be used in the devices it describes, “polymer, metal, glass, crystalline material such as sapphire, ceramic, fabric, fibers, fiber composite material, natural materials such as wood and cotton, other materials, and/or combinations of such materials.”

However, in a patent application that is both very broad, and at times very specifically technical, the central aim is always the same. An “emissive display” generates its own light, and Apple wants to make that process more power efficient.

OLED screens as used in the iPhone and iPad are emissive displays. The opposite, called a transmissive display, is where the screen itself does not generate light. The displays on early iPods, for example, were transmissive because they were LCD panels that were illuminated by separate backlights.

Emissive displays need what Apple refers to as either “light-blocking structures” or “crosstalk prevention structures,” which keep a display looking crisp.

“In the absence of light-blocking structures,” it continues, “light could reach red pixel R and could create thereby mix light between red pixel R and green pixel G (e.g., create cross-talk), thereby reducing the contrast of the display.” 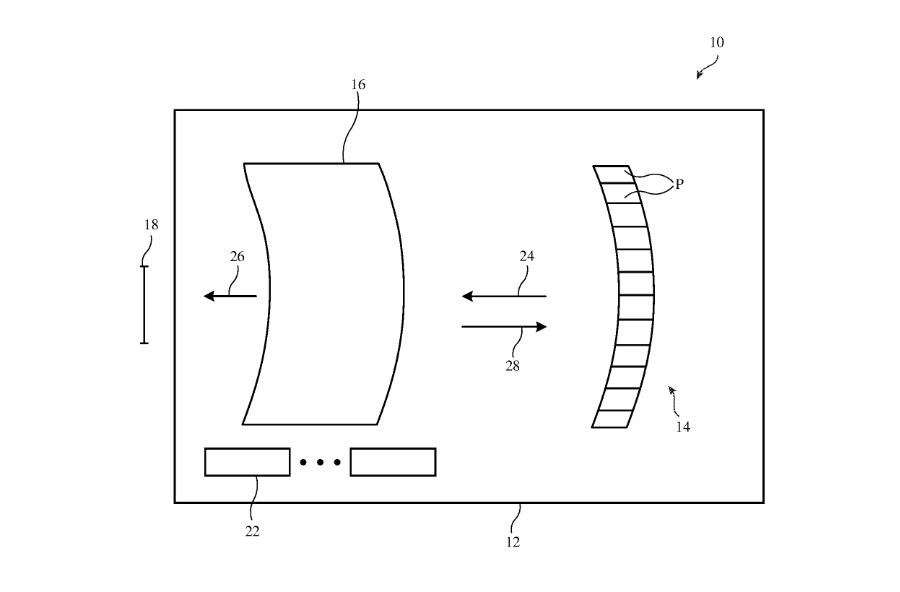 Detail from the patent application. Light coming from the strip of display pixels (far right) passes through a lens, thereby potentially wasting the energy that isn’t seen by the user

So already a certain amount of light energy that’s being emitted is purposely being blocked. Apple is investigating ways that this energy can be reused. “To enhance light emission efficiency from [the] display,” says Apple, “[it] may include light recycling structures.”

The patent application details multiple ways in which polarized and non-polarized light may be used, and then re-routed to or from the display. In each case described, though, the benefit is twofold.

First, the user gets to see a crisp, sharp image on their headset or any other display. But then, second, Apple gets to produce that image with a lower overall use of power.