Apple introduced a new software feature with iOS 13 that helps prolong the life of your iPhone’s battery called “Optimized Battery Charging.” I’d love to see Apple not only expand it to iPad and Mac but also take a page out of Tesla’s book (and Dell, Samsung, others) and adopt a feature from its charging strategy.

Update 12/24/20: It’s now over a year since Apple released its Optimized Battery Charging feature and it hasn’t really been improved. And looking back on 2020 – a year with the pandemic and the launch of the first M1 MacBooks, full battery control for charging is definitely past due.

With macOS Big Sur that launched this fall, Optimized Battery Charging is turned on by default. That’s great, but interestingly, I’ve noticed it doesn’t ever kick in on my 13-inch M1 MacBook Pro. Granted, I work from home and use an external Thunderbolt display that simultaneously charges it, but I still can’t get it to pause charging at 80%. I’ve tried a variety of things, including running my MacBook below 80% and plugging in around 10 am for a week consistently, still nothing, it always charges straight to 100%.

I would guess more people than ever are in the same boat as me as working remotely/from home has become a norm during the pandemic.

And that’s just part of it. The M1 MacBooks have massively improved battery life and this is weird to say, but the longer battery life is actually part of the problem here, haha! It’s genuinely difficult to run my MacBook battery down below 80% if I don’t do half of my workday without my Thunderbolt display.

Like 9to5Mac readers previously pointed out in the comments (thanks, all!), Dell has been offering manual battery charge control since around 2012. Samsung and other Android OEMs are also offering similar options.

This year has really proven that it’s past time for Apple to give users the flexibility to prioritize long-term battery health. A simple opt-in manual control for limiting the battery charge would do the trick. And notably, with people being home much more than ever (at least for the first part of 2021), manual control on iPhone and iPad would be very useful now and even when life gets back to normal.

If you’re just catching up on all this, check out all the details in the original post below:

Apple’s Optimized Battery Charging feature for iPhone in iOS 13 works by putting a temporary battery limit of 80% on the device when charging overnight. Then more closely to when you wake up, it will finish charging the remaining 20%. Apple describes how it works in Settings > Battery > Battery Health:

To reduce battery aging, iPhone learns from your daily charging routine so it can wait to finish charging past 80% until you need to use it.

The gist is that batteries sitting charged at full capacity will wear out the cells faster, so Apple’s feature increases battery lifespan by pausing the charge.

Tesla’s electric vehicles have a similar capability where they learn your schedule like iPhone and will be charged to the desired level by the time you need to leave in the morning. But Tesla goes further than Apple’s Optimized Battery Charging feature and allows owners to manually set a battery limit in the Tesla app. 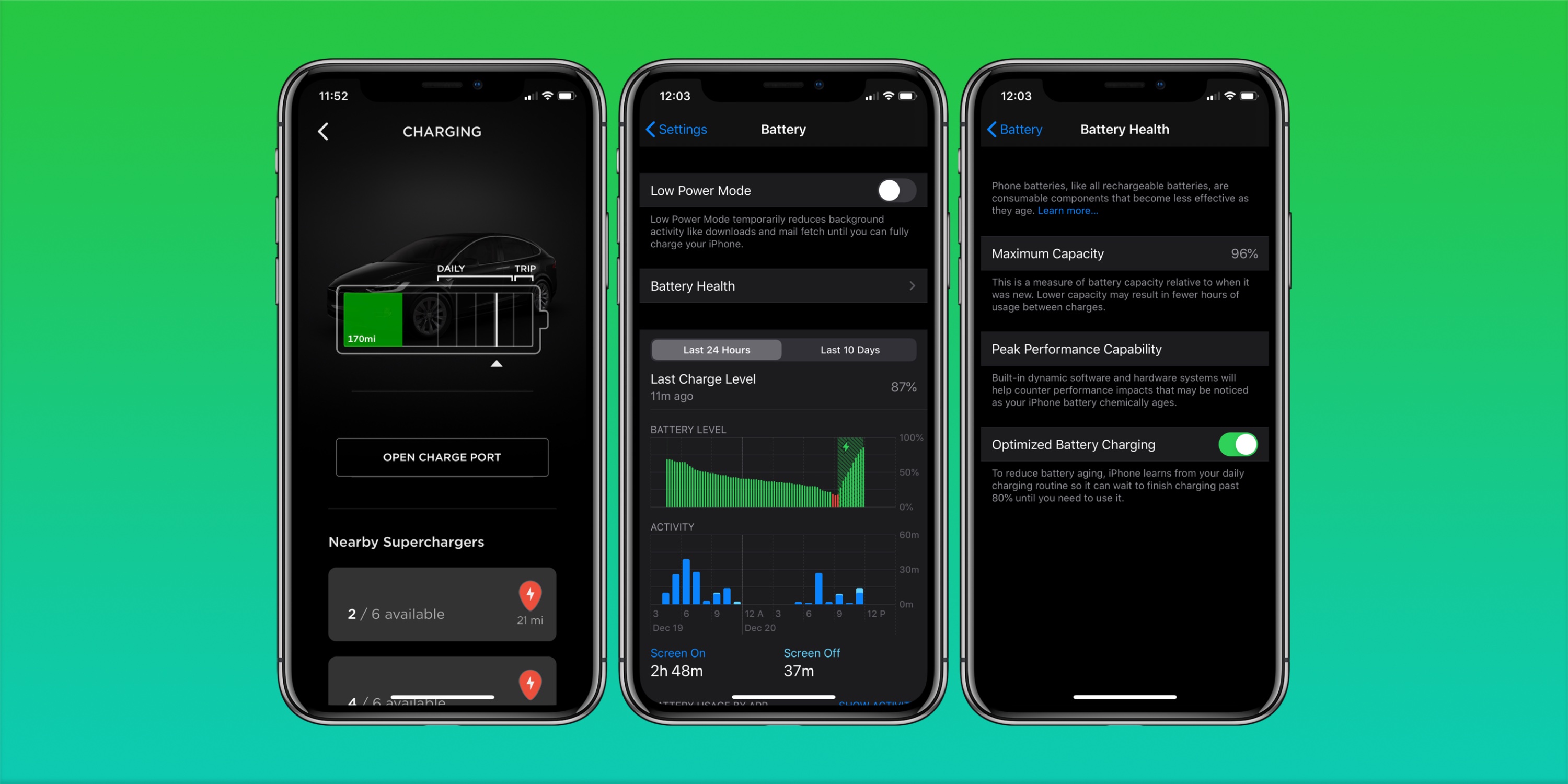 Tesla CEO Elon Musk has shared that charging to 80% for regular use and then tapping in into the remaining battery for long trips is best. And a battery expert who has done research for Tesla has even suggested using a 70% limit may be ideal for battery longevity.

Even though some of Apple’s batteries in its devices can be user-replaceable, they’re not designed that way, and it can be a risky option in some cases. Giving users the ability to set a battery limit and extend battery life even further would be a great way to extend a battery/device’s usable life, reduce waste, and make it more likely for customers to hand down or trade-in when they’re ready to upgrade. Even though it could reduce some of Apple’s revenue in the big picture, I think such a move is in line with Apple’s values of sustainability.

While I think this would be a great feature for iPhone, iPad and Mac may benefit even more. Many Mac notebook owners leave them plugged in all the time (or at least a lot of the time). Introducing a Tesla-like battery limit feature would provide the benefits we’ve talked about as well as educating all the users who don’t realize leaving a battery sit at 100% charge shortens its life.

And people tend to hold on to iPads and Macs longer than iPhones, so this could offer a better overall experience by eliminating the need for a battery replacement or at least pushing it out further in the device’s lifecycle.

Just like the current Optimized Battery Charging feature, Apple could implement the ability to set a limit in battery settings and give users a notification about the option, making it opt-in.