Apple is working on in-screen fingerprint technology for the iPhone 13, a feature that would be available right alongside Face ID as a secondary biometric option, according to The Wall Street Journal‘s Joanna Stern. Stern shared the tidbit in a piece looking at Samsung Galaxy S21 features that could be incorporated into the next-generation iPhones. 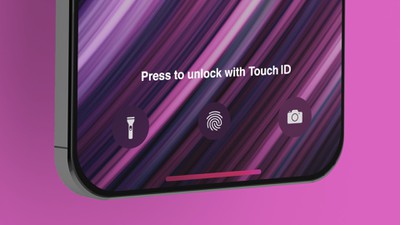 We’ve heard several other rumors about in-display Touch ID functionality from reliable sources like Apple analyst Ming-Chi Kuo and Bloomberg‘s Mark Gurman, both of whom have said that this is a feature Apple is considering adding to the new iPhones. A secondary ‌Touch ID‌ option would be useful for situations where Face ID is not optimal, such as when wearing a face mask.

According to Stern, she heard from a former employee who said the company was working with optical sensors for in-screen fingerprint reading, which “can be more reliable” than an ultrasonic solution.

Optical in-display fingerprint sensors work using light, and in Android phones that have adopted this technology, the screen lights up with a fingerprint icon where you’re meant to place a finger to provide light, and a camera creates an image of your finger. Optical sensors can be easy to fool because they’re using a 2D image.

The ‌Touch ID‌ home buttons that Apple has used in the iPhone, iPad, and Macs, are capacitive. Capacitive sensors use a series of tiny capacitors to create a fingerprint data map that’s hard to trick as it’s not using a straight fingerprint image.

Stern says that according to her source, whichever solution Apple decides to adopt will need to meet the security standards of its current ‌Touch ID‌ Home button, so there will be no downgrade in functionality.

Though Stern’s source says that Apple is working on optical technology, Apple analyst Ming-Chi Kuo believes that Apple is going to use ultrasonic technology. He has said that GIS will provide “large-area sensing ultrasonic” technology to Apple, with Qualcomm providing an ultrasonic module and lamination. For what it’s worth, Apple has also patented “acoustic” Touch ID functionality, which would work in-display.

Regardless of implementation, the return of ‌Touch ID‌ to the ‌iPhone‌ would be welcome as it would provide more authentication options for unlocking the ‌iPhone‌ in different situations, as well as an extra layer of security. So far, we don’t have confirmed rumors that this is a technology that’s definitely coming to the next-generation iPhones, nor is it clear that all 2021 iPhones would get the technology, especially if a more expensive ultrasonic solution is employed.