Projectors have always been a polarizing topic among home theater enthusiasts. Some have long sworn by them, touting the benefits of being able to conjure a 100-inch display out of thin air, while critics claim they’re virtually useless in anything other than a pitch-black room. It’s a debate that has raged for a long time, but even the biggest projection critics have to admit that projector technology has come a long, long way in recent years.

Unless you’re a home theater aficionado there’s a good chance you’ve never heard of XGIMI. The company makes projectors and, well, nothing else. But by being a one-trick pony, the company has been able to pour everything they have into building projectors that range from tiny and portable to beefy and ultra-powerful. The all-new XGIMI Horizon Pro definitely falls into the latter category, and I’ve been test driving it for a few weeks now.

As someone who never thought he’d be wowed by a home theater projector, I have one thing to say: Wow.

There are two Horizon models. There’s the standard model which tops out at 1080P and the Horizon Pro which beams its images at 4K. The standard model is priced at $1,099 while the Pro version will set you back $1,699. I tested the Pro model, so I can’t speak to the picture quality of the standard Horizon projector, though the device itself is identical in most other features. From here on out, all of my impressions will be of the Horizon Pro.

The projector is absolutely packed with bells and whistles, and it starts with Android TV. Using Android TV as the OS means that the device is essentially its own Chromecast, so if you want to cast screens from other devices without plugging them in, it’s super easy. There’s one small asterisk here that I’ll address in a minute, but in my testing, the built-in Chromecast worked well.

The 4K picture is honestly incredible, especially for a projector that is designed to be portable. I first tested it on a flat wall in my living room that is painted a medium gray color. This isn’t the most ideal situation for any projector, but the picture that I got was shockingly good. Further testing on a proper projector screen yielded predictably excellent results, with bold colors and lots of brightness, even in a room with five windows.

The Horizon Pro is rated at 2,200 ANSI lumens. That might not sound super bright, especially if you’re not familiar with the ANSI standard, but it is. ANSI lumens are a standardized brightness measurement that is more accurate for comparing one device to another than, say, LED lumens or light source lumens. To give you an idea of how the conversion works, 1,000 ANSI lumens are roughly equivalent to 2,400 LED lumens or a whopping 17,000 light source lumens. So, if you’re comparing the 2,200 ANSI lumens that the Horizon Pro puts out to other devices, make sure you’re comparing apples to apples.

What impressed me most about the projector wasn’t the picture itself — which, again, is fantastic — but the features that ensure you get the most screen real estate possible. The Horizon Pro features autofocus, obstacle avoidance, screen alignment, and (the holy grail of them all) auto keystone correction. It takes about three button presses (from the excellent remote that is included) to enable auto keystone. In my first test, I had it pointed at a small section of a wall with multiple problems. The image overlapped a 90-degree angle and a door frame, as well as a light on a table below. Here’s what it looked like: 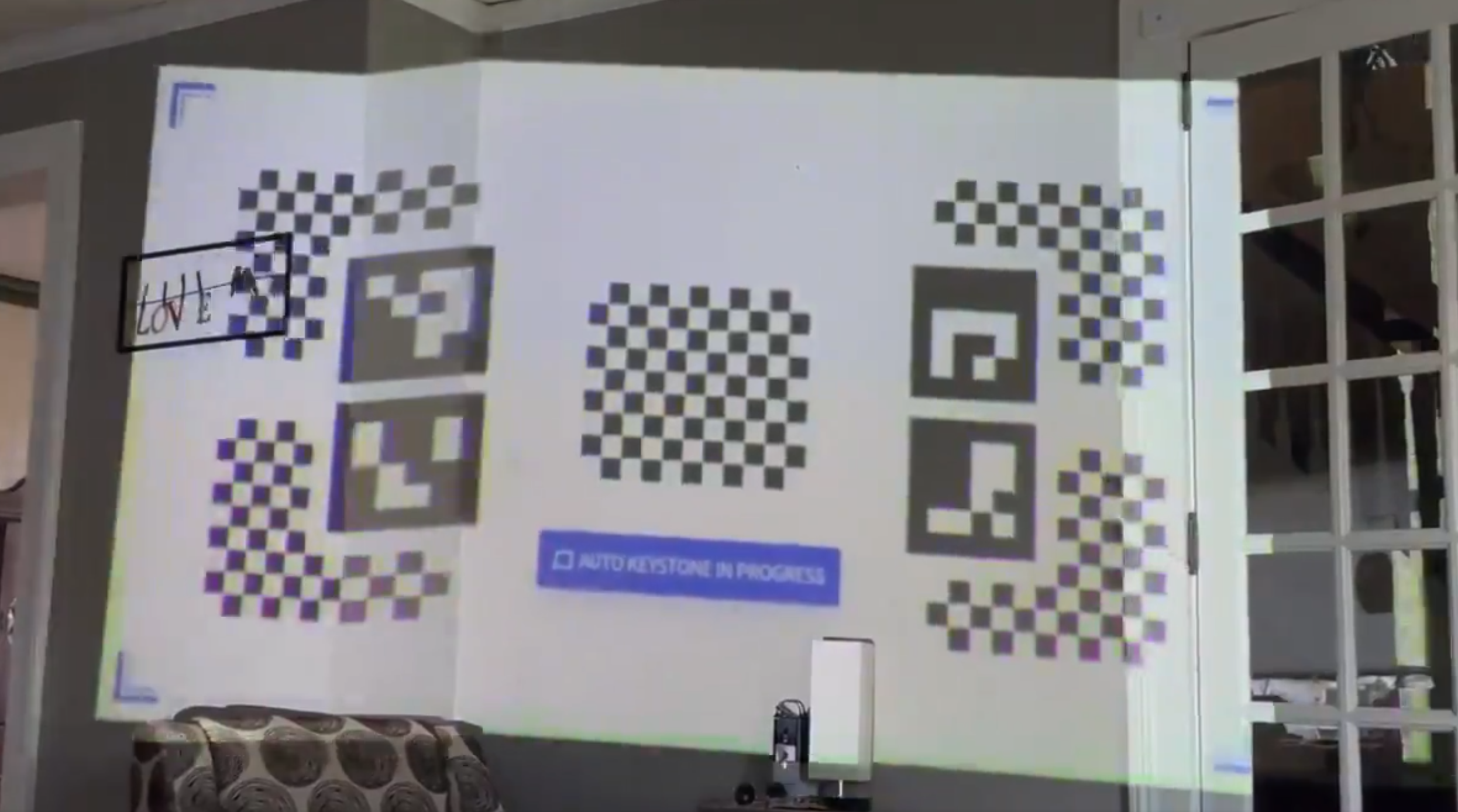 Yeah, that’s not going to work. I clicked to start the auto keystone and waited roughly 5 seconds. Here’s what it did:

I don’t care how big of a naysayer you are about home theater projectors… you have to admit that this is absolutely awesome. It basically plasters a high-resolution display anywhere you want it, automatically. Pretty nifty stuff!

The Horizon Pro includes a bunch of additional inputs including two HDMI 2.0, two USB 2.0, a LAN port, headphone jack, and optical audio. It obviously also features built-in Wi-Fi and Bluetooth 5.0, as you’d expect from a device like this.

Speaking of audio, a pair of Harman/Kardon speakers give the projector some pretty serious audio chops as well. It’s fine for most viewing situations, though if you’re investing in a projector like this you’ll probably opt for a full speaker setup at some point in the near future.

After playing around with the device for a few weeks I can say that I’m incredibly pleased with it. It’s dead quiet — seriously, I have to check if the power light is on on the top after I push the remote button as it powers up because it makes so little noise — and the picture and sound are both great. That said, it’s not totally perfect.

The one drawback here is that XGIMI hasn’t been able to get certification from certain streaming services for the device. You can watch a ton of different built-in streaming services, and with the Play Store you can download a bunch more, but some heavy hitters like Netflix and Disney Plus are missing.

XGIMI says it’s working on getting certification to be able to allow these services, but for now, you’ll have to actually plug something in — like a Chromecast or Roku stick — using one of the HDMI ports if you want to stream Netflix and a couple of others. If you’re paying $1,699 for a projector you’d expect to be able to watch Netflix on it, but then again, if you’re paying that much for a projector, another $50-$100 for a streaming device probably isn’t a big deal either. In fact, there’s a good chance you already own one, which would make this issue disappear real quick.

If you’re looking for a 4K projector and you have the money to spend, it would be hard to do better than the Horizon Pro. Boasting up to 300 inches of screen real estate, you’re never going to find a 4K TV that rivals what this thing can do, especially when you factor in portability and ease of use. It made me a believer in projectors, which is an achievement in itself.