Tapbots, the company behind the popular Tweetbot app designed for Twitter, is working on developing a new app called Ivory that integrates with the Mastodon social network. 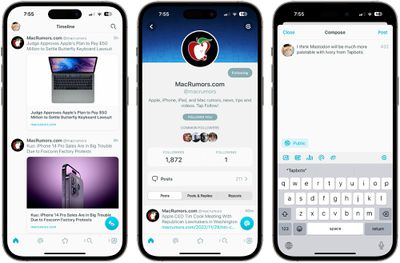 Currently in beta testing, the Ivory app is in the early stages of development, with many features that still need to be implemented and bugs that need to be worked out, but it is a promising start.

Many Twitter users have been swapping over to Mastodon following the Twitter takeover by Elon Musk, and Mastodon has seen a major uptick in adoption over the past few weeks. The app now has over one million monthly active users, with roughly one half of those added since October.

Mastodon is a decentralized social network that allows for people to create their own servers, and it is more confusing to use than Twitter. The website and the app are not immediately familiar to Twitter users, but apps like Ivory could ease the transition for those who are leaving Twitter.

Ivory has a design that is quite similar to Tweetbot at the current time, offering access to a timeline, @ mentions, search, profile, and other options. There’s also a dedicated compose button shaped like a horn, as posts on Mastodon are referred to as “toots.”

It will be some time yet before Ivory is ready for a public release as a number of features like push notifications and lists are not yet implemented, but Tweetbot fans who have moved to Mastodon will be pleased to hear about the Tapbots project.